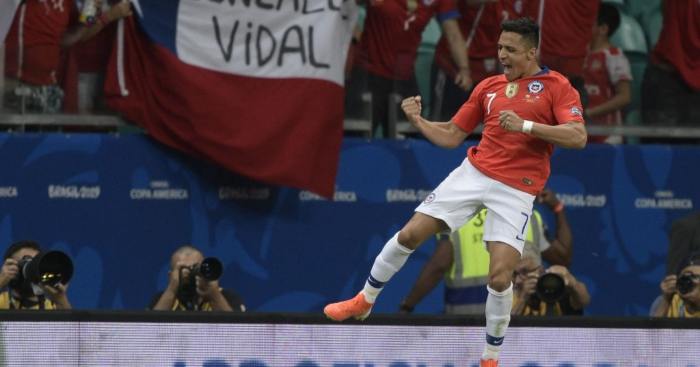 Manchester United could face an embarrassing Alexis Sanchez transfer scenario that would see him start the new season at Old Trafford, according to reports.

On Friday came the news that Brazilian side Palmeiras reportedly tried to sign him on loan, only for them to offer a small percentage of his £500,000 a week wages.

Sanchez’s reported salary is understood to be about six times more than the salary of Palmeiras’ best paid stars.

And now the Daily Mirror claims that Sanchez ‘could be forced to start next season’ at United with the club receiving ‘just two enquiries’ for the Chile international.

European clubs seem to be steering clear of Sanchez with the only two ‘tentative proposals’ coming from China and South America.

The newspaper adds that United are yet to have been offered ‘a substantial fee’ for Sanchez and that even if they had, the deal would likely fall apart over wage demands.

And Sanchez ‘could now be forced to link up during the summer tours of Australia and the Far East if United are unable to find him a new club’.

The former Arsenal man apologised for his poor form for United after the Premier League season had finished.

After a measly two goals in 27 appearances in all competitions, Sanchez took to Instagram.

“It was a very tough season…the fan (sic) are the ones who deserve an apology as they always support you no matter what happens,” he wrote.

“Personally, I didn’t perform as much as I was expecting because of unpredictable injuries.

“Press and people were speculating of things that were not even true. I was always a professional in all aspects. I apologise to the fans for not being able to achieve our goals, Nevertheless we are Manchester United!”