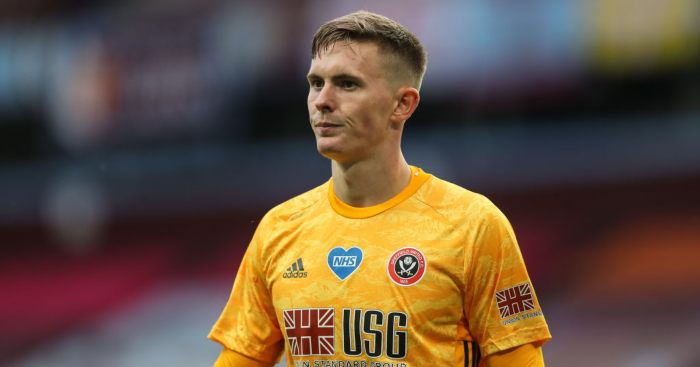 Man Utd have decided to send Dean Henderson back out on loan again next season but his future remains unresolved, according to reports.

Henderson has put in a number of brilliant performances on loan at Sheffield United this season, which has led to rumours that Ole Gunnar Solskjaer could give him a chance as Man Utd number one next season.

However, reports over the weekend suggested that the Red Devils will offer Henderson a new lucrative contract to remain at Old Trafford before sending the 23-year-old back to the Blades on loan again.

The potential new terms are thought to be worth in the region of £100,000 a week and The Sun said on Sunday that Man Utd expect Sheff Utd to stump up all of his wages.

It’s unlikely that the Blades would be able to finance such a deal and now the Daily Mail claims that his ‘future is no closer to being resolved with less than a month until the Premier League season kicks off’.

The Daily Mail  – who describe Henderson as ‘left in limbo’ – agree with previous reports that Solskjaer will stick with David de Gea and Sergio Romero next campaign, with the Man Utd boss happy to send Henderson back out on loan again.

Sheffield United are understood to be ‘growing impatient’ as they look to sort out their squad for next season with bids made for Bournemouth keeper Aaron Ramsdale.

The report adds that Man Utd are ‘not averse’ to another loan spell at Sheff Utd but ‘would prefer to loan him to a foreign team instead of a Premier League rival’.

Henderson only wants to be part of Solskjaer’s squad as first choice and the Red Devils are ‘keen for the youngster to play for a team with a similar style to theirs as they groom him to become De Gea’s successor’.