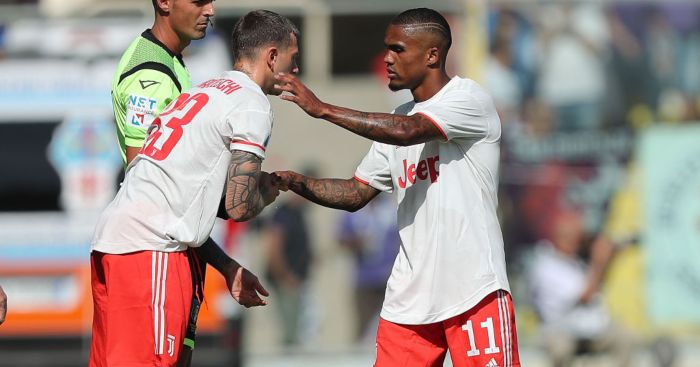 Ole Gunnar Solskjaer is ready to give Douglas Costa a starting berth if Man Utd can agree a deal to sign the winger, according to reports.

Brazilian winger Costa appears to have no future in Turin, having fallen down the pecking order. Recently, the Red Devils outlined him as an alternative to Jadon Sancho – but several unnamed Premier League rivals were also said to be interested.

Sky Sports ran an article on Tuesday that said Man Utd are ‘keeping tabs’ on Costa and ‘have been closely following’ the winger’s ‘progress this season’.

The Brazilian ‘is among the alternatives being considered by the club’ if they can’t pull off a move for Sancho this summer.

Added to that, though, transfer expert Gianluca Di Marzio said on Sky Sports News that there was one “problem” with a possible move.

“Juventus want him to leave. His agents are moving to find a solution, they have talked to Manchester United, to understand if the would be interested.

“They will think about it, but the problem is that Douglas Costa is often injured, so this is a problem for a club that wants to buy him. The agents have talked to Manchester United, for sure, and have proposed his transfer.”

Gazzetta dello Sport claims that Man Utd have been ‘monitoring the Brazilian’s situation for some time’ and there is a ‘real satisfaction from United’.

Ole Gunnar Solskjaer is ‘ready to give him a starting shirt in a fantasy attack’ if the Red Devils can push through a move but there remains the ‘usual, eternal problem’ of his physical condition.

Corriere dello Sport have an update too and it comes with a big claim that Man Utd have already made a €30m bid for Costa, which Juventus find ‘too low’.

The report also pulls up Federico Bernardeschi’s name as another Juventus winger that United have an interest in with the Italian said to be ‘fascinated by the atmosphere of English stadiums’.