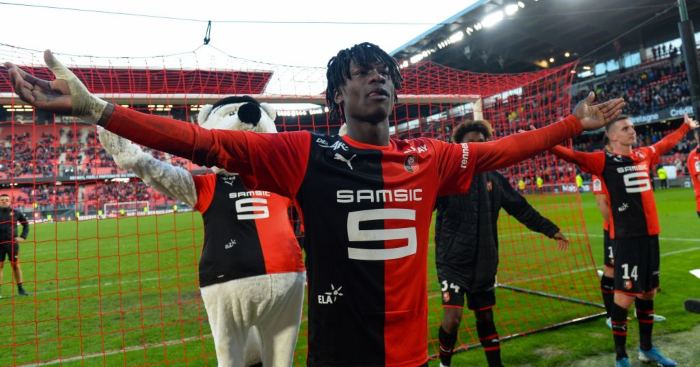 Man Utd now believe they are leading the race to sign Rennes youngster Eduardo Camavinga, according to reports.

The 17-year-old has taken Ligue 1 by storm at such a young age, making 36 appearances for Rennes in all competitions in central midfield this season.

Angola-born Camavinga has recently gained French citizenship and still has almost six months to go before he turns 18.

Man Utd have previously been linked with Camavinga this season with L’Equipe saying at the time that  ‘obviously’ the Premier League club were part of the chasing pack in the hunt for Camavinga’s signature, with Atletico Madrid and Barcelona also mentioned.

And now The Metro claims that Man Utd ‘believe they have the upper hand as they’re willing to loan the teenager back to the Ligue 1 club for a further 12 months’ with Real Madrid also interested in Camavinga.

The Red Devils ‘have made more than a dozen checks on the midfielder in the last 12 months’ with United’s head of global scouting, Marcel Bout, making a ‘personal check on the teenager’.

Man Utd think they ‘must pounce now’ for Camavinga while European football is ‘in flux’ with the Premier League outfit confident Rennes ‘will cash in this summer’ because of the 17-year-old only having two years left on his contract.

A source told The Metro that Rennes want ‘silly money’ for the France under-21 international with a fee of around £60m rumoured.

United, however, are unwilling to pay that and ‘believe a deal of around £25m is realistic’ for the Real Madrid target.