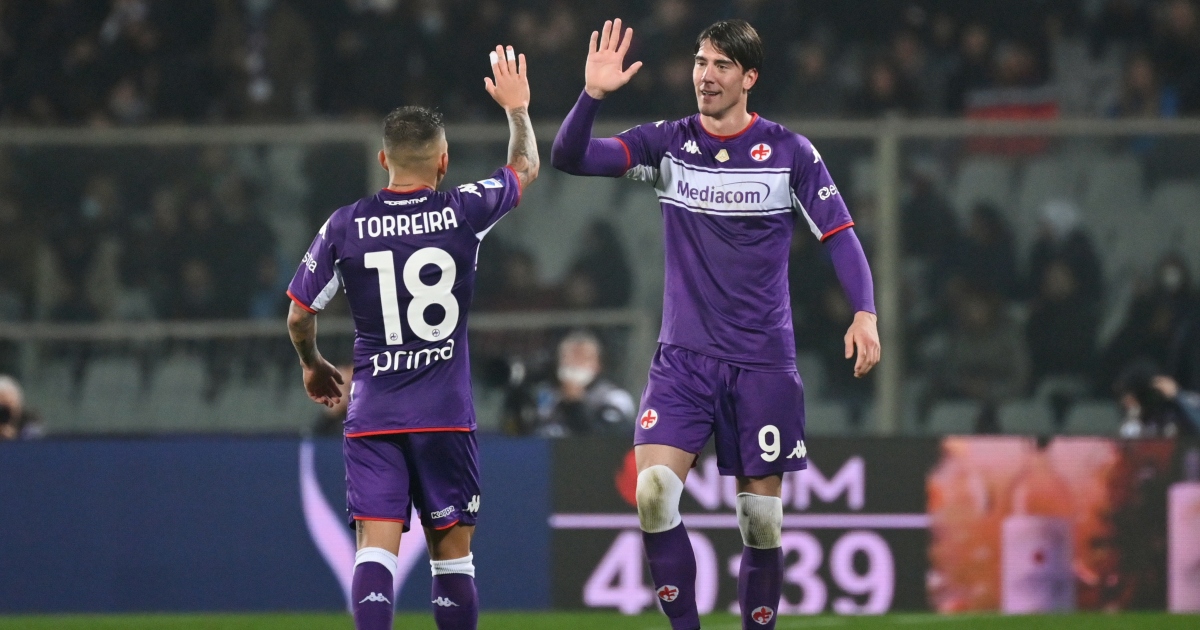 Man Utd have ‘entered the race’ to sign Arsenal and Tottenham target Dusan Vlahovic, according to reports.

Vlahovic, currently at Fiorentina, has been in excellent form this season following a terrific 2020/21 campaign.

As a result, he has emerged as one of Europe’s hottest strikers, attracting interest from the north London duo as well as Borussia Dortmund and Juventus.

However, the Daily Mail claim that Man Utd have ‘joined multiple clubs in tracking Vlahovic’.

The Serbian’s contract expires in 2023 and he has already made it clear he will not sign an extension with Fiorentina.

The Florence club are eager to receive a transfer fee for Vlahovic rather than lose him on a free transfer, but are holding out for around €70million in either January or next summer.

Earlier this month, Sky Italy journalist Gianluca Di Marzio claimed Arsenal failed to get in touch with Vlahovic’s entourage, despite their positive negotiations with Fiorentina.

Dušan Vlahovic has scored 27 goals in 37 Serie A games with Fiorentina in 2021. He’s 21 and his leadership, mentality, techinque, quality, physical structure, shoot… are unbelievable. ⭐️🇷🇸 #Vlahovic

Fiorentina want €70m to sell him – many clubs in the race. What a talent. pic.twitter.com/AxIcp2CtNC

As mentioned prior, Dortmund are keen on signing Vlahovic. According to Calciomercato, the German outfit have offered Donyell Malen plus €30m for the young striker.

The report claims that Malen is worth around €30m himself. Despite the estimated €60m deal not matching Fiorentina’s asking price, it would instantly sort out a replacement for the Serbian.

Elsewhere, Barcelona manager Xavi is ‘trying hard to convince’ Ousmane Dembele to stay at the club amidst rumours linking him with a move to Newcastle, according to reports.

Dembele joined the Catalan club for a huge transfer fee in 2017, signing from Borussia Dortmund for over £100million.

His time at the Camp Nou has been hampered by injuries with the young winger only making two appearances so far this season, featuring for 49 minutes in total.

Dembele’s contract expires at the end of this season with Barca desperate not to lose him on a free transfer.

However, Barca’s new manager Xavi is ‘trying to convince’ the Frenchman to sign a new deal, according to Spanish outlet Mundo Deportivo.

Xavi wants Dembele to feel like he ‘belongs at the Nou Camp’ and that he is a big part of the new manager’s plans.