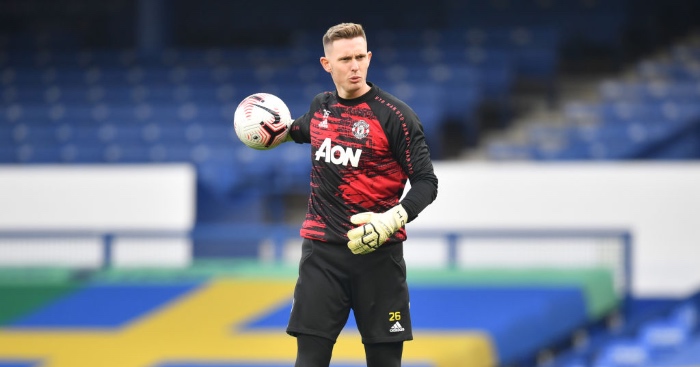 Man Utd officials are reportedly considering a new loan deal for goalkeeper Dean Henderson, despite wanting to keep him during the summer.

The Englishman returned from Sheff Utd after a successful spell at Bramall Lane.

He was kept on at Old Trafford as the club thought he would challenge David De Gea for a place in the starting lineup.

However, he’s only made three appearances so far, including two in the Carabao Cup.

According to ESPN, United are now open to letting him join another club in search of first team football.

That would help to rebuild the 23-year-old’s confidence and get him back up to full match fitness.

There would be plenty of interested clubs too. During his time at Sheff Utd, Henderson was one of the best keepers in both the Championship and Premier League.

A lower level Prem club would likely be a perfect fit for Henderson.

Regular football would allow him to continue to impress England boss Gareth Southgate.

Henderson is set to join the national team as they prepare to face Ireland and Belgium on the international stage.

They also have to play Iceland in the UEFA Nations League.

Henderson’s lack of minutes is mainly due to De Gea’s form. Since Henderson returned to Old Trafford, De Gea has made sure not to make too many mistakes.

The Red Devils have conceded 14 goals in their first seven league matches, however. This is something De Gea will have to address if he is to remain first choice.

They failed to keep a clean sheet in their most recent match. United defeated Everton away from home thanks to a Bruno Fernandes brace.