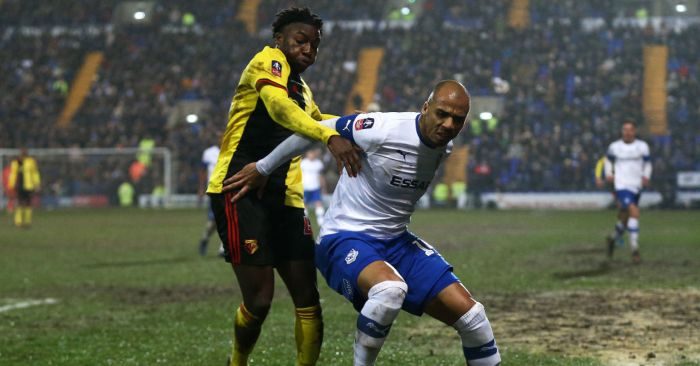 Coventry City v Birmingham City
Even if this Midlands match-up doesn’t see what would be a very stretched definition of a ‘cupset’ on Saturday afternoon, it will go down in history for seeing the visitors playing away at their home ground. Think back to your university days and it’s similar to your landlord making a short notice visit to your rented property to make sure the sofa is still intact, the carpet is free of sick stains and rats have not yet infested the kitchen.

Such has been Coventry and Birmingham’s respective seasons at St Andrew’s, this meeting could be akin to the tenants showing the landlord their new throws, a freshly cleaned rug and a kitchen that wouldn’t look out of place in a Cillit bang advert.

Coventry have lost just once at their temporary home all season, making a mockery of their so-called exiled status, while Birmingham have lost on home turf half a dozen times this campaign. With the Sky Blues reaching for the League One stars and Brum in a glum daze in the Championship, an upset is likely.

Northampton Town v Derby County
One of two Friday night games in this year’s fourth round and the only one that could qualify as a mismatch given the fact Sheffield Wednesday and QPR are separated by just four points and four places.

At Sixfields, however, 38 points split the hosts Northampton Town and their Championship rivals. Talk of an upset isn’t cobblers though, as contrasting seasons have this as a meeting where League Two could quite reasonably trump Championship.

Mysterious Keith Curle will be hoping to leave Philip Cocu’s awful travelers scratching their heads as to how they managed to exit the competition at the hands of the lowest-ranked club left in the competition. But those who have done their due diligence will be dutifully aware that Derby struggle for both results and goals on the road.

Only Bradford have a better home record than Northampton in League Two this season, while Derby have just one win on their travels. Under the lights, don’t expect the Rams to do it on a cold Friday night in Northamptonshire.

Millwall v Sheffield United
Sheffield United manager Chris Wilder is already the standout runner-up for (or winner of) Manager of the Year, but silverware would increase his slim odds of ousting Jurgen Klopp as the outright favourite to strike gold.

However, this wonderful education we call a football team – that’s Millwall to you and I – are one of the worst sides the Blades could have hoped to face. Not only are the Lions one of the most in-form teams in the Football League, they have form when it comes to the world’s oldest cup competition.

They have reached the quarter-finals 11 times, including last season, and no team in English football history has knocked out more top-flight clubs when not one themselves than Millwall (25).

I’m not an advocate of trawling back through decades of stats because it is largely irrelevant, but there is something in the Den DNA which suggests Sheffield United’s success this season may be limited to the league alone.

Having defeated Premier League opposition over three-and-a-half hours, trailing 3-0 inside the first 45 minutes of the tie, this Prenton Park welcome will do as many wonders for the Red Devils’ confidence as being laughed at by your long-time school crush after working up the courage to ask her out in the middle of the canteen.

United may well be hoping for a draw from the League One strugglers so that a replay can be taken back to Old Trafford where the grass is green and the football ain’t so pretty. On this Birkenhead pitch, it is a different story. There is more brown than green, more divots than smooth, more opportunities for a Tranmere side so used to such conditions against a team whose season is metaphorically summed up by this field of not quite greens.

West Ham United v West Bromwich Albion
Ah, the West derby in all its football geekiness glory. Unfortunately, that might be about as exciting as this clash between two out-of-form sides gets.

Slaven Bilic returns to, well, a few miles away from his old stomping ground, but still with revenge that would do justice to his villainous beard against a club who haven’t even come close to replicating his success in the years since the Croat’s dismissal.

For the Hammers, Premier League success is not yet guaranteed, so a good half a dozen changes can be expected. West Brom’s terrible run of form means there is a great opportunity for the squad players at the Baggies to stake a claim for a regular spot in the first XI.

Whether a yo-yo side looking a great/good/decent (delete as appropriate) bet for promotion defeating an out-of-sorts relegation-battling outfit qualifies as an upset is to be determined, but for the sake of this article, I’m all for it.