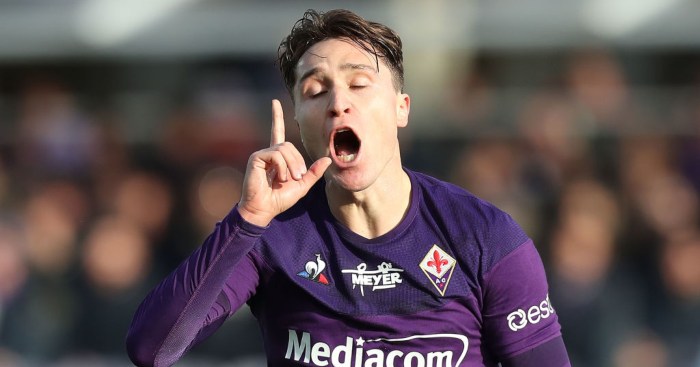 Man Utd have made an offer for Fiorentina winger Federico Chiesa as they look to pave a way to meaningful negotiations, according to reports.

Chiesa has scored seven goals and provided three assists for his team-mates in 26 appearances in all competitions this season.

And La Nazione (via Sport Witness) claims that the Red Devils have made an offer of €50m in cash for Chiesa with a bid likely to be accepted if they pushed it towards €60m.

Other offers have come from Inter Milan and Juventus but their fellow Serie A side said ‘no, thank you’ to their proposals of around €30m.

Man Utd have been the most impressive club interested in Chiesa and the Premier League side have ‘really knocked on Fiorentina’s door’ and ‘delivered an offer in cash to the club’s transfer men’.

The €50m bid ‘isn’t the right one’ but Man Utd hope that it could ‘result in a concrete base to start real and true negotiations’ as they continue steps to bring Chiesa to Old Trafford.