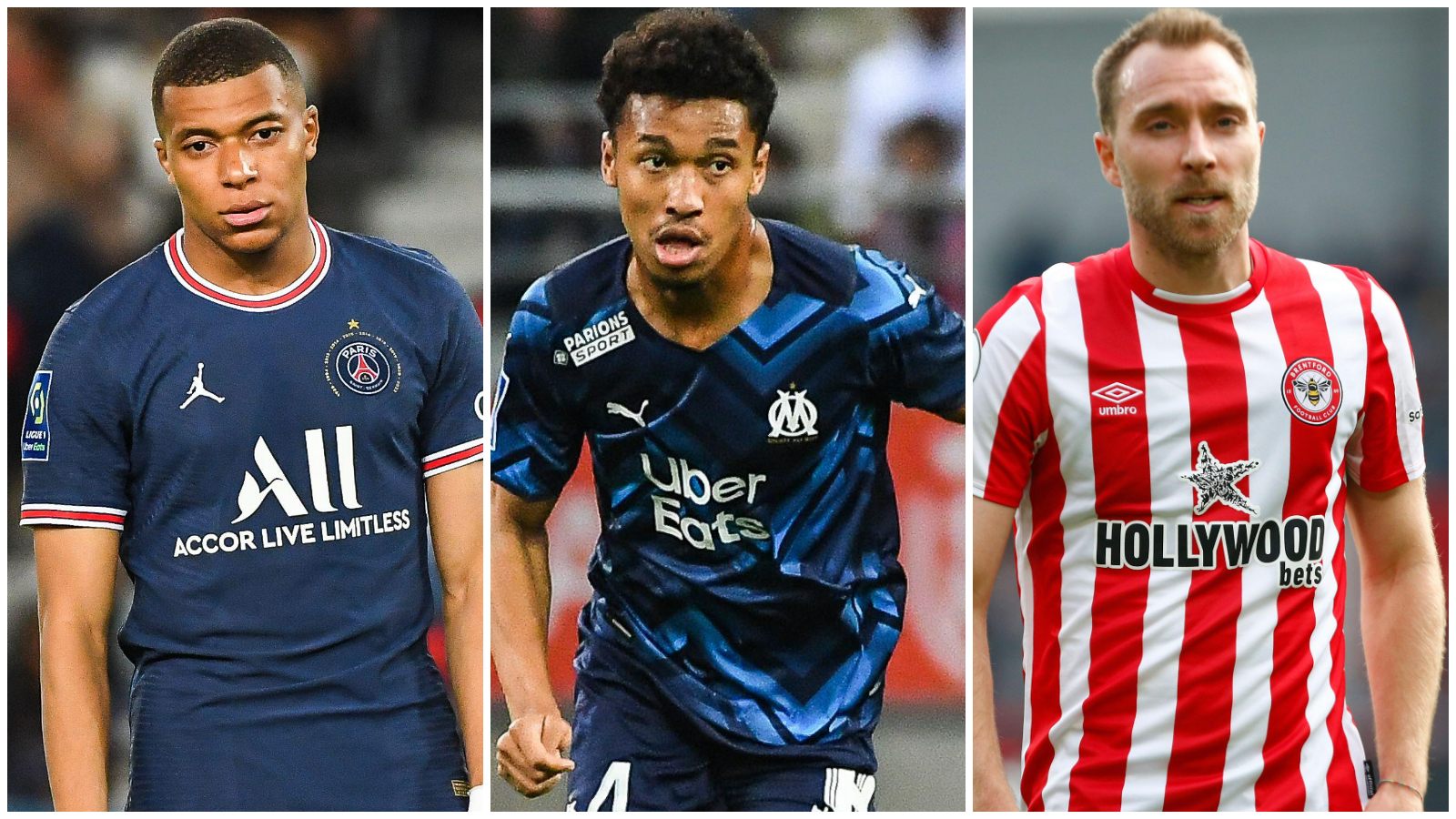 Man Utd are apparently scouring Europe this summer for free agents. We’ve done their job and ranked the top 20 out-of-contract stars for them…

A report in The Sun suggests Manchester United have told agents to find them freebies this summer to stretch their £100million budget as far as it might go.

Of course, they could have saved themselves a load of commission and had a glance at Transfermarkt, which is exactly what we’ve done. We’ve even ranked the top 20 free agents (that don’t already play for United) on how well suited they might be to the Red Devils and how likely they are to move to Old Trafford.

Dicky Arnold can expect our invoice in the post…

19) Kylian Mbappe
The Red Devils have never even been mentioned in connection with Mbappe, which is a little odd since United’s name tends to get chucked into the conversation with any player looking for some leverage. Perhaps it’s because Mbappe is one of the few players who doesn’t need it. He’ll either stay at PSG for a mega-f***-tonne of money, or go to Real Madrid, which has always felt like his destiny. Either way, he’s as far away from United as anyone can get.

18) David Brooks
It’s not clear if the Bournemouth midfielder is actually a free agent this summer – the length of his renewal in 2019 was not disclosed – and, in any case, after the wonderful news last week that he is now cancer-free, Brooks will be focused on getting back to fitness. Scott Parker said last week after securing promotion that Bournemouth will ‘get him back fit and well’ and the tone suggested he’s going nowhere.

17) Antonio Rudiger
With Erik ten Hag on the hunt for a centre-back, Rudiger would tick every box. But the Chelsea defender is heading for Real Madrid instead of United. You would, wouldn’t you…

16) Andreas Christensen
Another out-of-contract Chelsea defender is already house-hunting in Barcelona. Which would make for a bitch of a commute to Carrington.

15) Franck Kessie
Would be perfect for United. Too late. The AC Milan midfielder has a more appealing offer from Barcelona.

14) Alexandre Lacazette
United could do worse than Lacazette – that’s if the Frenchman would even consider moving north from Arsenal – but they pondered a move in 2017 before he joined the Gunners. Back then, a ‘United source’ told the Daily Express that the concern over Lacazette was that a lot of his goals were penalties and ‘in the end, he wasn’t considered because he has no stamina, no physical impact and isn’t a big game player’. So they signed Romelu Lukaku instead and that went spiffingly…

13) Luiz Felipe
Lazio aren’t fussed enough to offer Felipe a tempting deal to renew so the centre-back is likely to sign for Real Betis as a free agent.

12) Federico Bernardeschi
The Italy midfielder is no longer a starter for Juventus – he’s been in Max Allegri’s XI 14 times in Serie A this season – and clubs in Italy, like Inter and Lazio are keen. But Bernardeschi is apparently willing to take a pay-cut to remain in Turin, which seems the most likely outcome.

11) Alessio Romagnoli
The Italy centre-back – he last played for the Azzurri in 2019 – seems most likely to stay in Italy. Romagnoli has lost his place as a Milan starter and his prospects look no brighter for next season, but still he is considering renewing at the San Siro since there appears to be no better offer on the table. The proposal from Lazio – his boyhood club – fell short and there is hardly a queue of clubs clamouring for the 27-year-old.

10) Jason Denayer
The former Sunderland and Manchester City centre-back has started as many games for Belgium in 2022 as he has for Lyon after falling out of favour with his club. Newcastle have been linked with Denayer, which is exactly as his agent would have it.

9) Corentin Tolisso
The midfielder is almost certain to leave Bayern Munich this summer and would be a hugely attractive option for most clubs if it were not for his injury problems. Had Tolisso been able to stay fit, he would likely have been given an extension by Bayern. But only 15 Bundesliga starts in the last two seasons mean they are content to let him leave and any suitor must be wary. Sevilla and Fenerbahce have been linked.

8) Florian Grillitsch
There has been plenty of Premier League interest in the Austria midfielder, who has confirmed he is leaving Hoffenheim this summer. Arsenal, Everton and Leeds are all sniffing, but not United.

7) James Tarkowski
Can you imagine the stink that signing a 29-year-old defender from Burnley would cause among the more idiot-fringe of the United support? But United are in no position to be sniffy about a proven centre-back who, unlike most of Ralf Rangnick’s rabble, knows how to defend. Seems, though, that we’ll be spared the furore since Tarkowski appears to have a straight choice between West Ham and Newcastle.

6) Andrea Belotti
Remember when Belotti was one of Europe’s most in-demand stars? You’d do well since it was bloody ages ago. Since then, the Torino striker’s stock has fallen somewhat – he’s scored eight goals, albeit in an injury-hit season – and now the Italian is being linked with West Ham and Wolves. Which is arguably United’s level these days, so…

5) Noussair Mazraoui
United could certainly use a right-back since Aaron Wan-Bissaka has been sussed and Diogo Dalot hasn’t convinced anyone yet that he can be trusted to play as first choice. Ten Hag knows all about Mazraoui, which reportedly led the incoming boss to ask United to move for the Moroccan, but it seems they are too late; Bayern Munich got there first and Mazraoui is already buzzing about moving to Bavaria.

4) Paulo Dybala
United have had their fingers burned before by Dybala, who looked set to join the Red Devils in 2019 until he and his agent started asking for huge wages, massive commission and a unicorn that sh*ts Skittles. Taking the hint that Dybala’s heart wasn’t exactly in it, United walked away and there is absolutely no indication that he fancies Old Trafford any more than he did three years ago.

3) Ousmane Dembele
United have been persistently linked with Dembele, especially when he was an injury-prone £100million-plus flop. Now he’s had something of a conveniently timed revival under Xavi, talk of a United move has gone quiet, with Barca more willing to renew and PSG supposedly sniffing around the winger. If he opts to leave Barca, you can be certain United’s name will crop up but there seems little desire on either side to go back there again.

2) Christian Eriksen
Back from the dead to play with Fred? Possibly. There is undoubtedly a role for Eriksen at Old Trafford and the 30-year-old has proven in half a season at Brentford that he still has what it takes to boss games at the highest level. If Bruno Fernandes isn’t pulling strings for United, no one is. Eriksen would be a very good addition, if United can convince him to leave London and reject offers from Brentford and probably Spurs.

1) Boubacar Kamara
The Marseille midfielder ticks a lot of boxes for United. Holding midfielder – check. Young – check. Reasonable salary – check. Villa are very keen on Kamara but they have been put off somewhat by the 22-year-old’s demand for £150,000 a week. He’d be the highest-paid player at Villa by some distance; at United, he’d be towards the lower end of scale. The Red Devils have been credited with an interest and Kamara would help to fill a gaping void in United’s squad. Since it seems to make perfect sense, it almost certainly won’t happen.