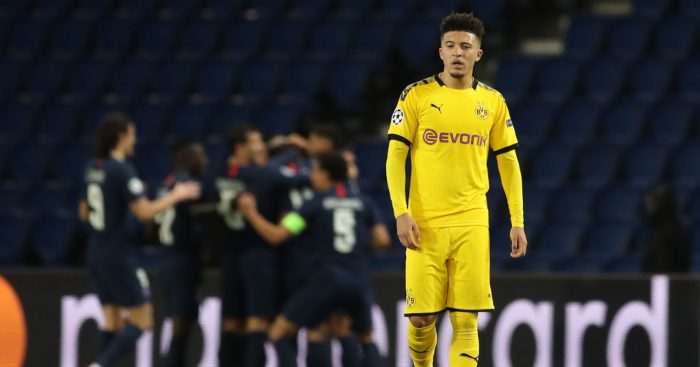 Man Utd have not had any discussions over signing Borussia Dortmund winger Jadon Sancho, according to reports in Germany.

A report on Monday in The Sun claims that Manchester United have ‘agreed almost every detail of a move to Old Trafford – down to the small print’ as they look to bring Sancho back to the Premier League.

The result of ‘months of secret talks’ is that his contract length, wage, bonuses and even ‘a huge buyout clause’ have been agreed and now it’s just down to agreeing a fee with Dortmund.

OPINION: Man Utd are within one £35m deal of finally cracking the market

However, that has been completely dismissed in two reports coming out of Germany as they address the story from The Sun.

Ruhr Nachrichten (via Sport Witness) claims that Sancho was valued at around €150m (£131m) before the coronavirus outbreak but ‘there still remains a nine-digit number as a minimum’.

British newspapers have repeatedly claimed that any clubs interested in Sancho will have to pay £120m if they are to convince Dortmund to let their prized asset leave.

The report in Ruhr Nachrichten continues by claiming that only a handful of clubs can afford Sancho with Man Utd ‘one of them’.

In stark contrast to The Sun, Ruhr Nachrichten adds that ‘nothing has been discussed and negotiated with Manchester United’ for the player and ‘this information [about Sancho and United from England] is simply not correct’.

Meanwhile, Sky Deutschland backs up their report by saying that there has been ‘no agreement’ between Man Utd and Sancho.