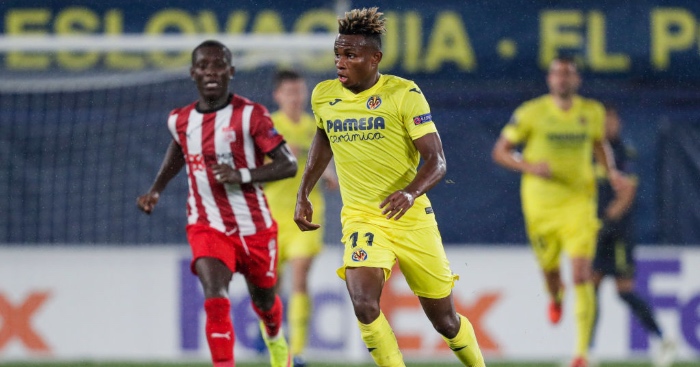 Chukwueze is apparently being monitored by five other Premier League clubs, including Chelsea and Liverpool.

The 21-year-old was the subject of a substantial bid from Liverpool back in January, but it was rejected.

FEATURE: Five questions for Paul Pogba at a career crossroads…

According to 90Min, the Red Devils have now become interested in signing the player.

They are joined by Chelsea, who see Chuckwueze as an ideal replacement if Callum Hudson-Odoi joins Bayern Munich.

Liverpool’s interest remains, although the form of Diogo Jota means they might hold off on a move.

Wolves apparently view the Nigerian as an alternative for Adama Traore if he leaves Molineux. Traore has been linked with both Liverpool and Barcelona.

Leicester are the final Prem club to be interested.

The report states that elite clubs from other European leagues are also interested in the player.

Villareal, however, will expect any potential suitor to meet his release clause. That currently stands at more than £80 million.

His contract lasts until June 2023.

Chukwueze has emerged as one of the brightest young talents in Spain since breaking into the first team.

He’s already made 89 appearances for the Spanish side. During that time, he’s scored 13 goals and assisted 11 more.

He made his debut for Nigeria back in 2018 and has received 14 caps for his country.

Chukwueze is certainly a player to watch out for in the future. He is thought to be considering the next step in his career.

At the moment, it looks likely that a move to England is the best option.

Liverpool may pull out of the race to sign him, but that still leaves plenty of Prem clubs who are willing to spend money on him.

One sticking point is the huge transfer fee. That could rule out Leicester and Wolves if a bidding war begins.