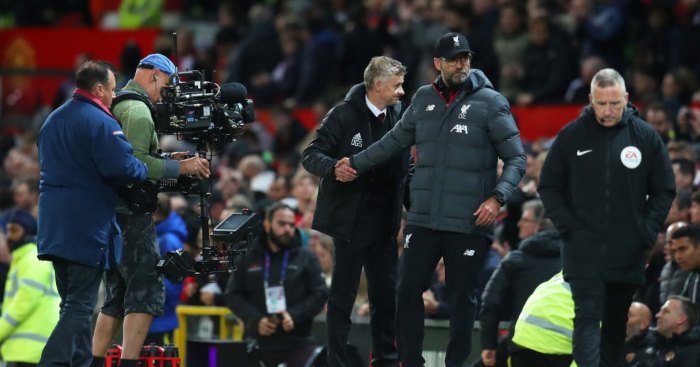 Ole Gunnar Solskjaer’s side headed into this match as underdogs against Klopp’s rampant side – little wonder given the visitors had won their last 17 league matches and the Red Devils were just a point off the relegation zone.

United have so often been the scourge of Liverpool at Old Trafford, though, and were on course for a memorable win thanks to Marcus Rashford’s contentious goal, only for late replacement Lallana to secure a draw.

“They just defend,” Klopp said in his post-match press conference. “It is no criticism. It’s just a fact.”

“Mr Atkinson let the game go on because he knew we had VAR. As soon as they scored they checked it but then it was not obvious because with a challenge you cannot always be 100% sure but without VAR I am 100% sure Atkinson would have blown for a foul.

“It’s great for offside and handball but for these situations we have not got it right yet. I was so confident that it was going to be overturned but then it has to change that not many decisions are overturned.

Read our 16 Conclusions from the match here as Seb Stafford-Bloor dissects the performance of both sides.