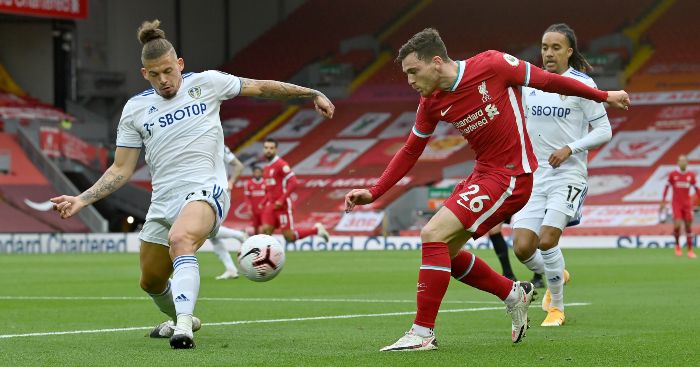 Kalvin Phillips has been labelled a ‘perfect’ Bryan Robson-esque ‘replacement’ for Jordan Henderson at Liverpool.

Phillips has impressed in the first Premier League season of his career so far, anchoring Leeds to three wins and two draws in his seven appearances.

The Championship winners have drawn with Arsenal and beaten Everton since the 24-year-old returned from a shoulder injury, having missed consecutive 4-1 defeats to Leicester and Crystal Palace.

Garth Crooks feels the England international, who reminds him of Manchester United legend Robson, would be ‘perfect’ for Liverpool.

‘Leeds missed Kalvin Phillips against Leicester and Crystal Palace, but not against Everton,’ he told BBC Sport. ‘The England international is making a name for himself, and was far too sharp for the Toffees.

‘This kid reminds me of a young Bryan Robson, when the former Manchester United and England captain played for West Brom. Phillips can cover the ground, he’s not afraid to stick his foot in, and sees the pass.

‘He doesn’t immediately grab your attention but given time you begin to realise the enormous contribution he’s making to the game.

‘I think he’s the perfect replacement for Jordan Henderson and I don’t mean just for England.’

At least he isn’t telling Liverpool to sign Lewis Dunk for £45m anymore.

Eddie Howe hailed Phillips after his performance against Everton, praising “a hugely influential” in Marcelo Bielsa’s side.

“I think he gives them the stability and the confidence for all their other players to attack,” he added. “You can see their full-backs are really front foot – left-back and right-back overlapping and underlapping.

“He is always there when they need him to counter any threat on transitions or counter-attacks.