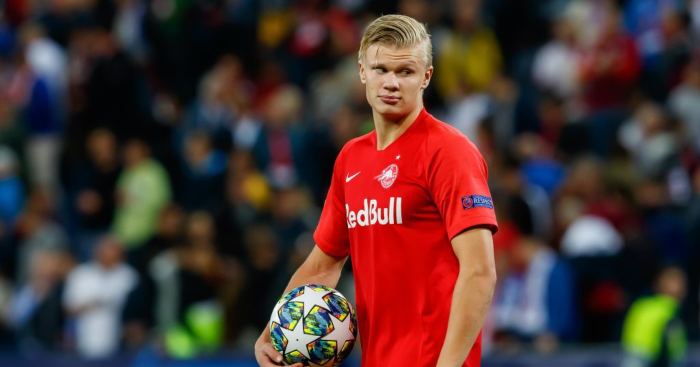 Erling Braut Haaland has reignited speculation that he could swap Red Bull Salzburg for Manchester United in the future by talking up the impact of Ole Gunnar Solskjaer on his career.

Haaland netted a hat-trick on his Champions League debut against Genk last week, leading to rumours that United and Arsenal were set to go head-to-head to sign him.

And the 19-year-old’s impressive track record this season – he now has 17 goals and registered five assists in 10 matches – has led to suggestions that Barcelona were also keeping tabs on the player, with the player’s father, the former Leeds and Man City midfielder Alf-Inge Haaland – commenting on the interest in his son’s future.

However, it would seem United hold all the cards over the race to sign the teenager, with the player spending his formative years at Molde under the guidance of Solskjaer and Haaland has admitted his countryman has already had a huge impact on his life and career.

Speaking to Norway’s TV2, and as translated by the excellent Sport Witness, Haaland said: “He has had a huge impact on my life, both as a person and as a trainer. He won the Champions League and was an incredibly good player.

“He has taught me a lot. Solskjaer is a fantastic person and a very good coach. He is one of the reasons I am here today,” the Salzburg star said.

Haaland was born in Leeds and grew up a fan of the Yorkshire club and appears open to the idea of playing in the Premier League one day.

Discussing a future transfer, he continued: “I have dreamed of playing for the best clubs in the world my whole life, and I especially like English football.”