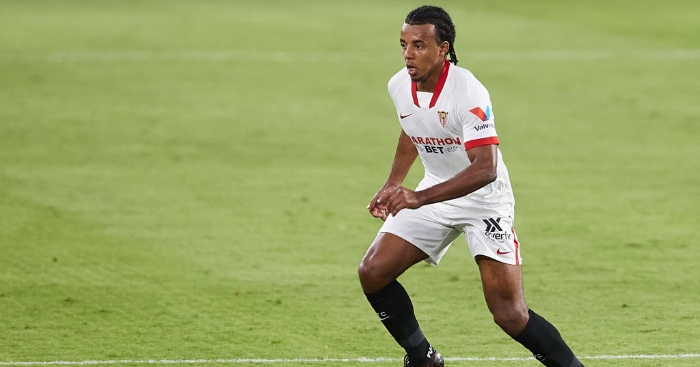 Man Utd could make a move for former Man City target Jules Kounde from Sevilla, according to a report.

United boss Ole Gunnar Solskjaer is searching for a new defender to bolster his options after a slow start to the campaign.

They’ve conceded 11 goals in their first three games, including a 6-1 thrashing at the hands of Jose Mourinho’s Tottenham.

According to ESPN, Solskjaer has selected Kounde as a potential centre back partner for club captain Harry Maguire.

The Red Devils could even make a move for the player in January if their defence doesn’t improve before then.

Kounde is seen as a long term solution to the defensive woes that United have suffered recently.

Eric Bailly, Victor Lindelof, Marcos Rojo and Phil Jones have all partnered Maguire under the manager but haven’t impressed.

Their defence was completely overrun by Spurs attackers Harry Kane and Heung-Min Son at the start of the month.

If a move for Kounde fails in January, then it could happen in summer 2021. That means United will potentially have to decide between him and their other defensive target Dayot Upamecano from RB Leipzig.

Kounde is a promising young Frenchman who has already made 113 appearances at senior level. He came through the ranks at Bordeaux before joining Sevilla in July 2019 for a reported €25 million fee.

The 21-year-old reportedly agreed terms with rivals City back in September, although the deal was never finalised. They signed defender Ruben Dias instead from Benfica.

Kounde is currently valued by Transfermarkt at £36 million, although United’s interest may result in them paying far more for the player.

He has experience in playing in both Ligue 1 and La Liga, as well as the Europa League. His potential could make him a prime target for the rest of Europe’s elite clubs.

United will eventually need to decide between Kounde and Upamecano when the time comes.

Upamecano’s current contract includes a £38 million release clause which becomes active at the end of this campaign. That could become a vital factor in United’s next major signing.