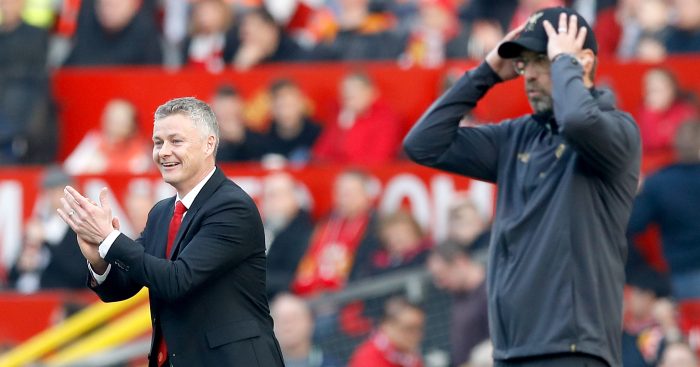 “As far as Manchester United sitting top of the table, I do think it’s a false position,” Jason McAteer told Sky Sports News with the utmost impartiality. The former Liverpool midfielder did say United have shown “a bit of resilience” and “a bit of team spirit”, but Ole Gunnar Solskjaer “hasn’t dealt with what other teams have dealt with”.

By “other teams”, we assume he means Liverpool. So we’ve compared Jurgen Klopp’s side with Solskjaer’s using those classic indicators of a “false position” – generally the things fans use to explain why their team is actually far better than the pesky Premier League table shows.

Klopp has had his say on Manchester United’s penalty record, Mark Clattenburg has weighed in (more on Clatts later) and the debate has been raging in the Mailbox for weeks. The facts are that United have had more penalties and conceded fewer, which has everything to do with good fortune, bias and corruption and nothing to do with nippy forwards dribbling into opposition boxes and being fouled.

Goals in the last ten minutes are luckier than goals in the first ten minutes. Any fan watching their team concede or watching a rival team score knows this to be objective bullsh*t but subjective sacrosanct. No real difference here though; let’s move on.

This could actually be a genuine indicator of a “false position” for Liverpool and therefore – because they may well have picked up more points – also for United. Liverpool’s top two centre-backs missing the vast majority of the season has got to be a factor in their relative struggle. But then both Virgil van Dijk and Joe Gomez played in the Aston Villa mauling and a thin squad is nobody’s fault but their own.

United only really need one player to stay fit, of course.

The game at Anfield on Sunday will be United’s first away game against the Big Six. A mere quirk of fixture scheduling or further evidence of their fraudulent position? With Chelsea and Arsenal in 9th and 11th respectively, maybe more the former.

Anything under 72 hours was classed as a quick turnaround.

Solskjaer said his side were “set up to fail” after they beat Brighton 3-1 in an early Saturday kick-off after a Wednesday Champions League game. And Klopp lost the plot as he congratulated fixture overlord Des Kelly for James Milner’s injury after one of their many, many quick turnarounds.

Here it is. Des Kelly vs Jurgen Klopp in full pic.twitter.com/Razfk39hfy

Turns out the puppetmaster Kelly has been screwing United more than Liverpool.

Imagine what United would have achieved with fans at Old Trafford? A 0-0 draw against West Brom perhaps?

Number of referees openly admitting to bias towards them
Manchester United: 1
Liverpool: 0

“He [Klopp] is wrong to suggest there is an aura around United that sees them given favourable decisions. There used to be when Fergie was there, but that has eased massively since he left.”

Calm down guys: the bias has “eased massively”. And to those of you questioning why there was any bias in the first place, it wasn’t really bias, it was “favourable decisions”. Our headline writers should really know the difference, apparently.

A website who pull up journalists over misquoting & misinterpretation… Headline not exactly accurate, is it? 🤔https://t.co/alPrd8bSc7