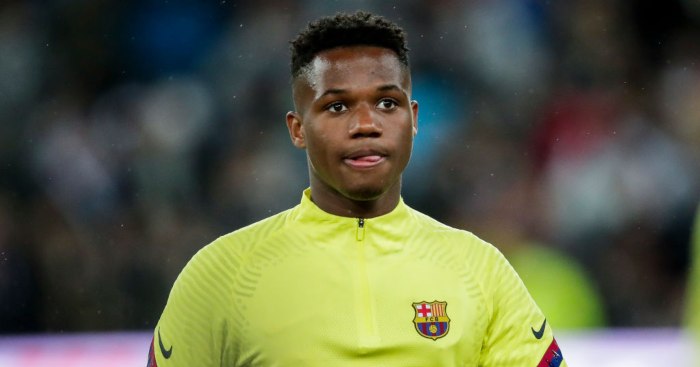 Man Utd have made a huge bid for Barcelona teenager Ansu Fati, according to reports in Spain.

The 17-year-old has featured fairly prominently for Barca this campaign, making 23 appearances, scoring five goals and providing an assist for his team-mates.

The Spanish teenager has emerged as one of the hottest prospects in world football during his breakthrough season at the Camp Nou with Borussia Dortmund linked with a move.

And now Sport claims that Man Utd have made a €100m offer for Fati – which was rejected by the Catalan giants – with the Red Devils ‘the main interested party’.

The Spanish publication says that agent Jorge Mendes enquired about Fati’s availability only to be told that ‘he was not for sale and pointed out his release clause was 170 million’.

Barca ‘considered the matter closed’ as ‘they were convinced no one would reach that fee’ but Mendes returned 10 days ago with a tempting offer.

The Red Devils were ready to give up ‘on Jadon Sancho to sign the Barça forward instead’ with Mendes making a €100m offer, which Man Utd ‘were ready to pay’.

The report in Sport added: ‘The offer was so big that the sporting department were obliged to take it to the board for a final decision. Bartomeu was clear: no. He sees the La Masia product as a key player in the club’s future.’

Barca will now look to ‘activate a clause to make him a first-team player’ which will see his release clause rise to €400m.