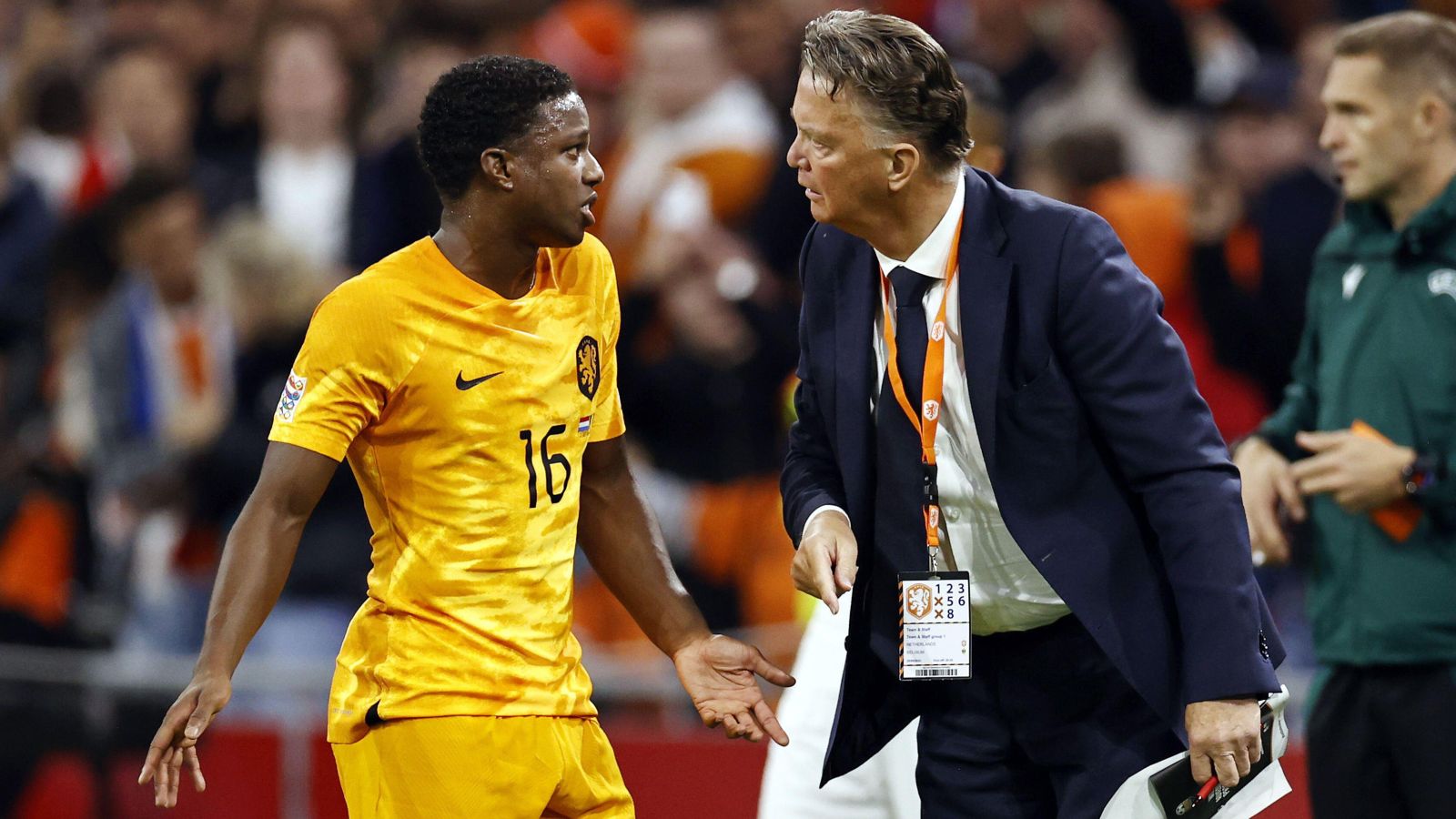 Man Utd defender Tyrell Malacia says he “didn’t agree” with Louis van Gaal trialling him as a centre-back in a recent international match.

The Netherlands made it to the Nations League finals on Sunday when they beat Belgium 1-0 with Malacia coming off the bench at the half-time interval.

Malacia is used to playing at left-back for Man Utd and his country but Van Gaal decided the 23-year-old would play on the left-hand side of a back three against Belgium.

It had been presumed that Daley Blind – who had been playing at left-back – would shift inside to left centre-back when Malacia replaced Nathan Ake at the break.

However, that wasn’t the case with Malacia performed well in a new position, keeping Belgium playmaker Kevin de Bruyne quiet in the second half.

Van Gaal and Malacia exchanged some heated words on the touchline during the match but the Man Utd defender admits he went forward “too much” for his role.

“I went two or three times too much forward,” Malacia told De Telegraaf.

“That is not possible in this position as quickly. But I was corrected by others.

“I didn’t agree with it at the time, yes. That’s right. After the game we talked about that moment for a while and then it was over.

“I’m comfortable with United at the moment. The national coach thinks that I should also be able to play in the centre of the defence. But I feel best on the left.”

Van Gaal revealed after the match that the idea of playing Malacia at left centre-back was to prepare the Netherlands for the absence of Bruno Martins Indi at the upcoming World Cup.

“I put Malacia in the left centre-back role because Martins Indi is not going to make it to the World Cup squad in time due to injury,” Van Gaal told ESPN NL.

“I have to look at other players who can play there and I wanted to see what Malacia could do, so Ake was substituted.

“The defensive work he did very well, but the constructive work in the build-up could have been a lot better.”

But former Ajax and PSV Eindhoven player Kenneth Perez reckons Malacia – who joined Man Utd in the summer from Feyenoord – should be Van Gaal’s first-choice left-back heading into the World Cup in Qatar.

Perez said earlier this month:”If he continues this and becomes a regular base player for Manchester United, then he is very close to becoming the first left back of the Dutch national team.

“Especially in a three-man defence, where you need someone who is very active and willing in that position [wing-back].”