The Jamaican is apparently seen by Man Utd as a cheaper alternative to both Sancho and Grealish. 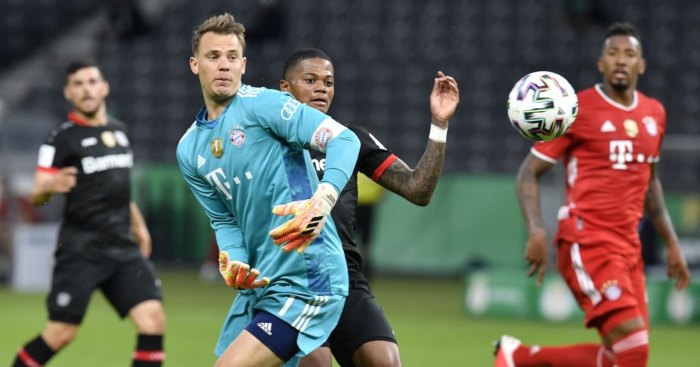 Premier League clubs Man Utd and Man City are among the sides interested in signing Bayer Leverkusen winger Leon Bailey this summer, according to reports.

Sky Sports claimed on Friday that Liverpool and Everton have also shown an interest in Bailey with scouts from all four Premier League clubs watching Leverkusen take on Bayern Munich in the DFB Cup Final in Berlin on Saturday.

Jamaican international Bailey is apparently seen by Man Utd as a cheaper alternative to both Jadon Sancho and Jack Grealish, with reports previously speculating that Bayer Leverkusen are likely to ask for £40m for a player who has scored just five Bundesliga goals this season.

And now David Ornstein in The Athletic claims that Bailey ‘would favour a move to England this summer’ with Man Utd and Man City ‘thought to be among those to have expressed interest, although he is not a first-choice target for either team’.

The report adds that ‘talks are scheduled between the club, Bailey and his representatives this week to establish clarity’ over his future with the ‘intention of those discussions is to agree on an acceptable valuation and exit strategy’.

Ornstein reckons that Leverkusen were looking for a fee of around €50m for Bailey before football’s shutdown but they could now accept €20-30m.