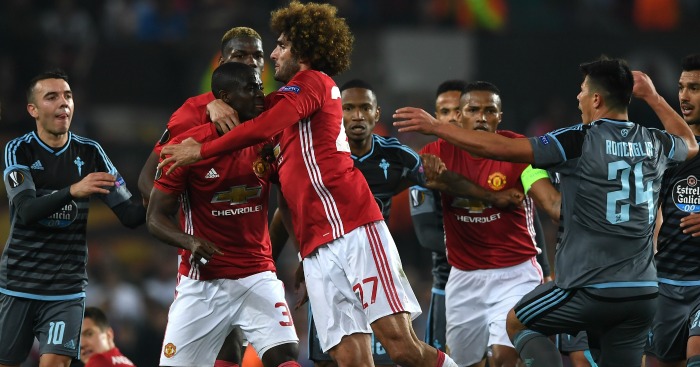 Eric Bailly was labelled “naive” by manager Jose Mourinho after the defender was sent off as Manchester United secured a place in the Europa League final.

The closing stages of United’s semi-final second leg against Celta Vigo, a 1-1 draw that sent the Red Devils through 2-1 on aggregate, saw both sides reduced to 10 men following a heated clash, with Bailly dismissed for raising his hand to John Guidetti and Facundo Roncaglia for retaliating.

Both players will now be suspended for the final in Stockholm against Ajax on May 24.

Speaking about Bailly after the match at Old Trafford, Mourinho told BT Sport: “I didn’t see the incident, but he was phenomenal. The game was emotional until the end for everyone. Some kept control in better ways than others.

“I don’t know but I think it was with Roncaglia, right? Roncaglia’s not new in these kind of situations and probably Eric was a bit naive.

“We lose a very important player for the final and we don’t have many.”

United’s task looked straightforward enough when they took the lead via Marouane Fellaini’s 17th-minute header to make it 2-0 on aggregate.

But it was nervy for them thereafter, with Celta wasting several decent opportunities before equalising through Roncaglia in the 85th minute – three minutes before he and Bailly were dismissed – and ex-City man Guidetti then passing up another good chance right at the end.