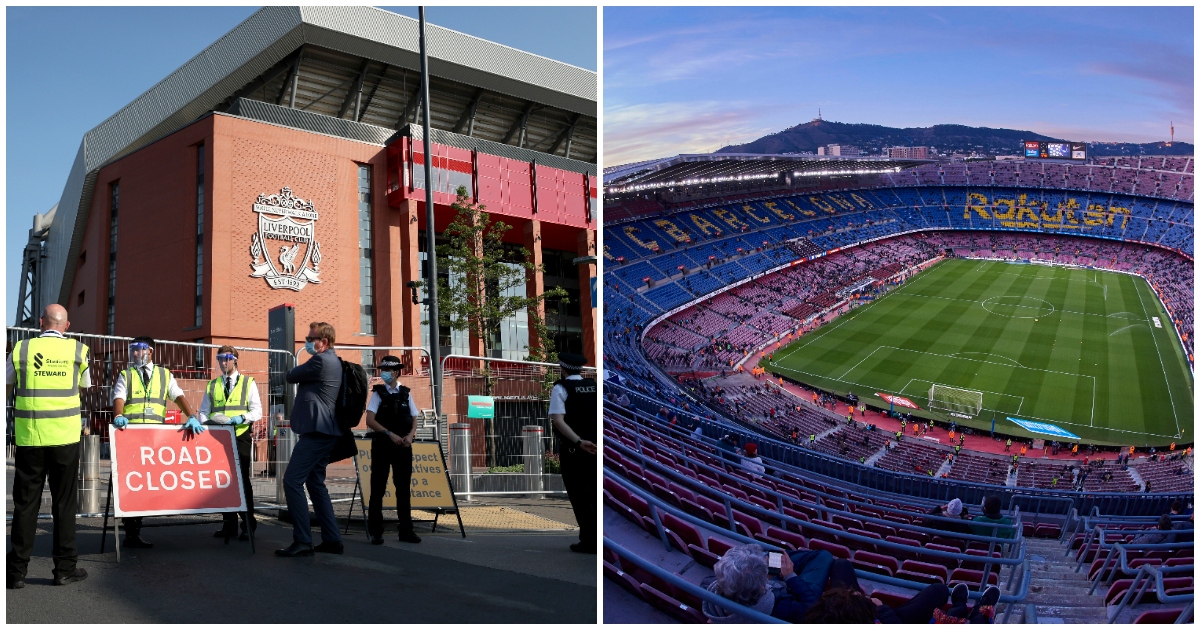 While Man Utd consider knocking down Old Trafford, Barca and Real have chosen to refurbish, Liverpool are extending, while Milan and Inter are rebuilding.

Manchester United are apparently considering knocking down Old Trafford among proposals to update their famous but tired old stadium.

United, typically, are relatively late to the party, with top clubs across Europe having already refurbished or rebuilt their homes. Arsenal, Atletico and Bayern Munich opted to move; Tottenham and Juventus chose to rebuild on their current site.

Here’s how United’s options compare with other clubs already building or planning for construction.

Why the redevelopment?
Because the Nou Camp, a 99,000-seater cathedral though it is, is a crumbling and decaying cathedral. Like Old Trafford, it looks spectacular on television, but the 64-year-old stadium is not ageing well and with both Madrid sides redeveloping their home or building a new one, Barca need to get the builders in just to keep up in Spain. The absence of a roof over the majority of the stadium has seen it overlooked when it comes to hosting major events. For Euro 2020, Atletico’s Wanda Metropolitana was the venue for the games played in Spain.

What’s the plan?
Espai Barca (Barca Space) was originally approved in 2014 but the plans had to be tweaked and resubmitted for approval by Barca members late last year. They involve upping the capacity to 105,000 – an increase of just 6,000 – but the new place will be ‘at the avant garde of technology’. Which sounds better than the current pigeon sh*t-riddled gaff.

The new Camp Nou will have a retractable roof covered in 30,000sqm of solar panels to power a 360-degree wraparound screen. The stadium will be built in three tiers, with the prawn-sarnie brigade housed in a smaller ring between the second and third tiers, not dissimilar to Wembley.

The redevelopment extends beyond the main stadium, with plans for office and hotel space, a 15,000-seater indoor arena and, obviously, an ice rink.

Will it affect the team?
Work is scheduled to begin later this year and part of the stadium will be closed next season. It is likely the Barca will have to move out for the entirety of the 2023-24 season, and the new stadium is set to be completed towards the end of 2025, even if work on the surrounding area will continue until 2027.

How much is the cost?
At present, it is estimated to cost around £1.3billion – a similar figure to Barca’s recent debt.

But the club have secured a £508million loan to be repaid over 35 years and since it is estimated that the new stadium will rake in around £170million more an on annual basis, the Catalans expect the redevelopment to pay for itself.

Why the redevelopment?
The Bernabeu is older than the Nou Camp, having first opened in 1947. It has since undergone a number of major refurbishments but none as big as the one currently nearing completion.

What’s the plan?
Not what it was.

The initial plans when unveiled in 2014 have had to be scaled back due to bureaucratic delays which saw the redevelopment begin in 2019 instead of 2017. Initially, Real wanted to add around 4,000 seats to the capacity to take it 85,000 but the renovation will not lead to any notable increase in the number of fans able to attend matches. Plans around a shopping centre, a hotel and additional car parking spaces were also scrapped.

So the biggest difference between Bernabeus old and new will be an updated facade, a shiny new roof, and retractable pitch.

The playing surface will be kept in a 35metre-deep greenhouse under the West Stand allowing concerts and NFL games to take place, as well as basketball and tennis.

Will it affect the team?
It already has. Real had to move out for 18 months between March 2020 and last September, a period during which they played their games – mostly behind closed doors – at the 6,000-seater Alfredo Di Stefano Stadium at their training HQ.

How much is the cost?
Real initially borrowed €575million to complete the remodelling work but late last year, they had to take out another €225million loan for ‘unforeseen’ work. Both loans are due to be repaid by 2049, with the latest amount at a fixed rate of interest of 1.53%.

“These conditions are the best ever obtained for long-term financing in the sport industry,” said Real in a statement, declaring themselves the winners of the 2021 Borrowing Cup. The Glazers are fuming.

Why the redevelopment?
Liverpool simply needed a bigger stadium. They faffed about with the idea of building a new one in Stanley Park but eventually around a decade ago, it was decided to update the current stadium over time. Before the first major expansion, Anfield could only accommodate around 45,000 supporters.

What’s the plan?
There have been a couple.

The first phase of expansion saw a third tier added to the Main Stand to increase the capacity by 8,500 to over 54,000. Work took just over 18 months and was completed in time for the first home game of the 2016-17 season.

The second phase focused on redeveloping the Anfield Road stand opposite the Kop. The initial plans drawn up in 2014 were binned and last summer, new plans were approved to increase the capacity of the stand to 15,967, taking Anfield’s total capacity to just over 61,000.

Work started almost immediately and the project is reported to be on budget and on schedule to be completed in summer 2023.

Liverpool, though, appear unlikely to be able to greatly increase Anfield’s capacity beyond those two projects, with no room for expansion behind the Kop or the Sir Kenny Dalglish Stand. So the Reds will have to make do with what will be the third-biggest stadium in the Premier League, behind Old Trafford and the Tottenham Hotspur Stadium.

Will it affect the team?
Nope. Nor have either of the projects impacted the capacity of Anfield during building works.

How much is the cost?
The Anfield Road phase is estimated to cost £80million – up from initial estimates of £60million – while the Main Stand redevelopment came in at around £120million. Via the art of addition, over seven years, Liverpool will have added around 16,000 to the capacity for £200million.

Why the redevelopment?
The San Siro, first opened in 1926, appeared to those of us watching Italia ’90 and later Football Italia on TV a stadium from a futuristic, parallel universe. But 32 years on, the city-owned Stadio Giuseppe Meazza is no longer the standard-bearer for football arena and requires updating.

What’s the plan?
To bulldoze the joint.

Astonishingly to people with a soul, the San Siro is set to be demolished with the intention being to replace it with a 60,000-seater stadium named The Cathedral, with an opening date pencilled in for 2027.

This was the idea chosen at the end of last year, with the new arena to be built next door to the current one. The Cathedral’s design apparently draws inspiration from two of Milan’s other iconic buildings: the Duomo di Milano cathedral and the Galleria Vittorio Emanuele shopping arcade.

Once the new stadium is built, the San Siro will be knocked down and replaced with a new 50,000sqm green area and ‘district dedicated to sport and leisure’. Although another architect has submitted plans to take off the roof and plant 35,000 cypress tress as a memorial to Italians lost to Covid.

Will it affect the teams?
It shouldn’t. Since the new stadium is to be built in what is currently a San Siro car park, Inter and Milan will move from the Giuseppe Meazza next door to the new Cathedral when it is complete. United could opt for a similar model

How much is the cost?
Since final plans are not due to be submitted until later this year, specific costs are unclear. Estimates suggest the development will cost around £1billion, with Milan and Inter responsible for the entire cost.

But both clubs estimate that the new stadium will generate matchday revenue of at least €80million, an increase of around €30million in Inter’s case.

Inter and AC Milan have revealed plans for their new stadium, named 'The Cathedral' 🏟 pic.twitter.com/VRfatraQEf