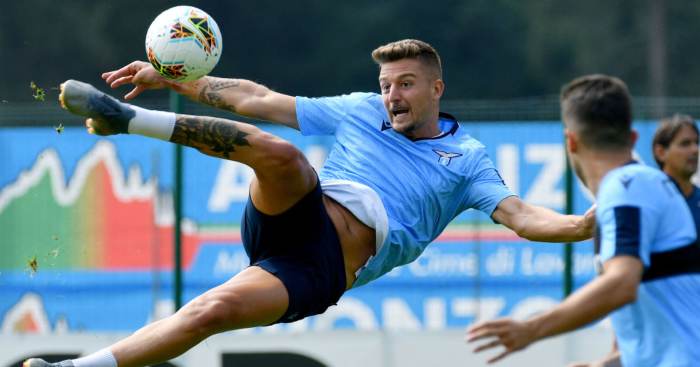 Manchester United are not looking to sign Lazio midfielder Sergej Milinkovic-Savic, according to reports.

Milinkovic-Savic has been hot on the radar for clubs all over Europe for the best part of 12 months, with United, Juventus and AC Milan all reportedly keen.

On Wednesday, it was claimed that the signing of Milinkovic-Savic to United was ‘practically done‘ as Real Madrid have ‘accelerated their negotiations to sign Paul Pogba.’

Before Thursday’s report in Italian outlet Gazzetta dello Sport said that the player’s representative Mateja Kezman had now flown to England in order to iron out the final details of the deal.

The newspaper insisted that United will pay a €75m up-front fee for the Serbia international, plus €5m in easily achievable bonuses and a further €10m that are more conditional – so a total of €90m.

However, the Daily Express has turned the speculation on its head by saying United ‘are not pushing to sign’ Milinkovic-Savic.

The report adds: ‘United are still expected to bolster their ranks in midfield but Milinkovic-Savic is not in their sights.’

It comes after news on Thursday that Sporting Lisbon midfielder Bruno Fernandes is unlikely to sign for United this summer after months of speculation.

Sky Sports reckon the Sporting midfielder ‘is not one of their priority signings’ this summer with the likes of Newcastle United’s Sean Longstaff also linked.