Once Man Utd have stopped laughing at the manner of their win, serious concerns remain. Paul Pogba is chief among them... 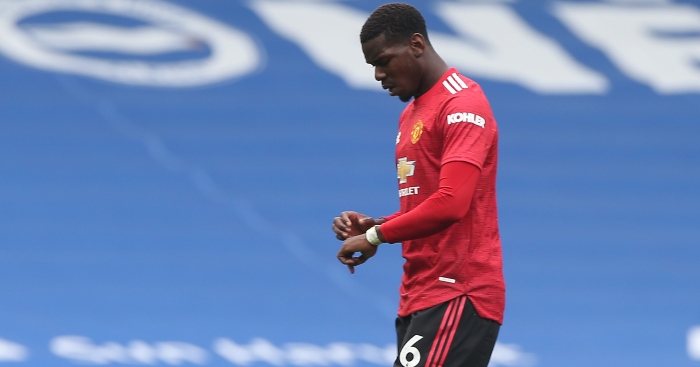 When Ole Gunnar Solskjaer sits down to rationally analyse 100 minutes of chaos at the AmEx, the Manchester United boss must recognise that his side took only two things from Brighton: the points; and all the LOLs.

United earned their first win of the season with the latest Premier League goal ever – a brilliantly-taken penalty handed to them after the final whistle.

Before that, United answered very few of the multitude of questions posed by last week’s defeat to Crystal Palace. Still they looked panicked at the back; outsmarted in midfield; and inefficient in getting the ball to their front three.

Solskjaer put the Palace performance down to United’s stunted pre-season, especially in comparison to their opponents. Brighton, like Palace, have enjoyed a much smoother passage into the new campaign, and in many areas, they looked sharper and more assertive than United. Except where it matters – in front of goal.

United rode their luck. Brighton hit both posts and the crossbar inside the opening half hour, and the frame of David De Gea’s goal was rattled twice more in hour that followed. Solly March and Leandro Trossard both missed late sitters. As impressive as Brighton were for large parts, their good work counted for nothing due to poor finishing.

Solskjaer will revel in three hilariously-earned points, but it is a toss-up for which unit will cause the United boss most concern before Jose Mourinho returns to Old Trafford next week.

United’s defence was pulled all over the AmEx but Brighton’s shape rather than the visitors’ own individual failings were mainly to blame this week. In midfield, the finger can be pointed squarely at one individual: Paul Pogba.

He may be their biggest name, but too often he is United’s greatest liability. For the second week in succession, Pogba was hauled off before the final quarter and this time he was lucky to see the second half.

When he was replaced by Fred, Pogba left the field on 65 minutes with no tackles, no interceptions, no key passes and no shots. He had the lowest pass completion rate of any United starter (just 71 percent) and was dispossessed more often than any team-mate having played 25 minutes less than most of them.

Can’t get over the end of this. Imagine carrying that much confidence when you’ve only had 5 or 6 good games in nearly half a decade https://t.co/TGzHOqDMzi

The eye-witness testimony is equally as damning as the statistical evidence. Given what we all know Pogba is capable of, watching him trudge one-paced around the base of United’s midfield is uncomfortable viewing. Playing so deep may be his excuse, as could be his lack of match fitness. But the only thing Pogba has offered consistently for four years back at Old Trafford is excuses.

And plenty of people buy them. To those who subscribe to the myth of Pogba as a domineering midfield match-winner, the blame lies more with his managers or his team-mates for failing to get the best out of the France star. But even the very basics of midfield play appear a stretch for Pogba at the moment.

This was his second horror show at Brighton in three seasons. In 2018, while wearing United’s captain’s armband, he admitted his attitude was ‘not right‘. Has much changed since?

It is too simple to say that he doesn’t look fit. A positive Covid test complicated Pogba’s preparations for the season but if Solskjaer feels his No.6 lacks match fitness, why wasn’t he involved at Luton in midweek?

It doesn’t help Pogba’s cause that Fernandes is out there week-in, week-out doing the things that Pogba himself is supposedly capable of. The Portugal star had a hand in all three United goals, making up for his mistake which gave Brighton their first-half penalty. While Fernandes continues to pull United’s strings, Pogba has no claim on a place further forward in Solskaer’s midfield.

Donny van de Beek’s presence complicates Pogba’s predicament even further. Should Fernandes, God forbid, ever be given a breather then the Dutchman is primed to fill in behind the front three.

Van de Beek called out United for playing too slowly against Palace while Fernandes was similarly damning of his team-mates immediately after leaving the Seagulls sick.

“We left so many spaces for them to play,” he said at full-time. “We are not as aggressive as I want. We must recover more balls, lose fewer balls and press better.”

Both Fernandes and Van de Beek could have been talking about Pogba. Fernandes has grabbed more games by the scruff of the neck in his 26-game Red Devils career than his French team-mate has in four years yet United continue to pander to Pogba in the increasingly-naive belief that one day he will justify his own hype.