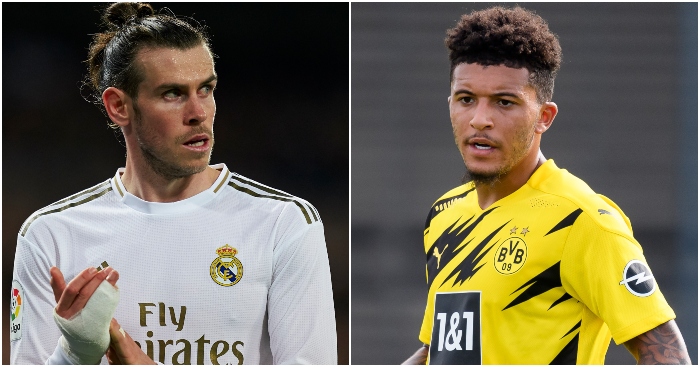 Reports suggest Manchester United are losing hope of signing Jadon Sancho because Borussia Dortmund just won’t roll over to have their bellies tickled. Instead, it seems United are considering bringing Gareth Bale’s career back from the dead in the hope Real Madrid’s record signing can rise again to the frankly ridiculous levels that made the Spaniards pay Spurs £85million. Seven years ago…

Should United leave Sancho on the shelf and bring Bale in from the cold in Spain? Two F365ers put up their dukes…

No – Bale is, at best, a short-term solution to a problem that isn’t going away…
Ian Watson

If Ed Woodward has learned anything from the Alexis Sanchez shambles, it has to be that signing big names coming down from their peak on big money is not a great idea. Especially when this particular name is not atop Manchester United’s list of targets.

Gareth Bale is the latest of 427 possible ‘Jadon Sancho alternatives‘ but United would be wise to steer clear of a deal that Real Madrid are absolutely desperate to make. No matter how tempted Woodward is by Florentino Perez’s charms, the United chief must remember why Real want shot of their record signing.

“He prefers not to play,” said Zinedine Zidane when asked why Bale had not travelled to Manchester for the Champions League clash with City last month. It was not the first time Bale opted to sit out and remain a problem for the manager. And that has been the case since Real jeopardised a deal a year previously with Jiangsu Suning that would have seen Bale earn around £1million a week.

Aside from the sweet release of international duty with Wales, that deal and the riches it would have brought appears to have been the only thing to have provoked a stir in Bale. Otherwise, as his agent has repeatedly said, the 31-year-old is quite content to stay in the Spanish sunshine and perfect his golf swing for as long as Real continue to deposit around £600,000 a week into his bank account.

That is why Real are pushing Bale in United’s direction – because they know Woodward is one of the few executives who might be tempted to unburden them of their greatest liability. Real may pay around 50 per cent of those wages but even with only half of his salary to find, Bale would still be United’s second-highest-paid player.

And what would they get for such an investment? We can’t possibly know – but we can reasonably assume it won’t be the return United wish for.

The hope would be that Bale could suddenly and spectacularly rediscover his form and return to the player of old. That Bale would certainly be worth the money, and more besides. But the old Bale was last seen in 2018 and we have to suspect that because of injuries, inactivity, age and demotivation, he is gone for good.

The contrast between United’s Plan A and Plan Bale could barely be more stark. Sancho is 11 years younger and over the last two seasons, more than twice as productive. Sancho has scored or assisted every 86 minutes since 2018; Bale has been involved in a Real goal every 228 minutes over the same period.

Bale is a short-term solution to a problem that isn’t going away. United are reluctant to meet Dortmund’s entirely reasonable £100m-plus asking price for Sancho with the theory being that Bale could keep his place warm on the right until next summer. But Sancho, should his form remain at a similar level, is not going to get any cheaper in 2021. Quite the opposite, perhaps, given United would not be the only bidder in the room.

As it is, they have a free run at a player Ole Gunnar Solskjaer clearly covets more than any other. Instead, United are contemplating presenting him with another who has been a problem for Zidane and Carlo Ancelotti – two coaches far more experienced than Solskjaer.

“I’d rather have a hole in the squad than an arsehole,” Solskjaer told United We Stand earlier this year. If United invest in Sancho, he need not risk having either.

Yes – Bale may be a short-term solution, but he could be a spectacular one
Dave Tickner

The perception of Gareth Bale’s career is a fascinating one. There’s a whole other piece to be written about the fact he must be the most successful flop of all time having scored well over 100 goals – including crucial ones in two of the four Champions League finals he’s won during his horrendous Real Madrid nightmare.

But let’s deal with the issue at hand, related if tangential as it is. Yes, obviously Manchester United should sign Bale. Any English club with the means – which is, admittedly, about three at a push – should sign Bale if they have the chance. He’s really, really good at football. The last couple of years at Real since he scored one of the greatest Champions League final goals of all time (have we mentioned this was the second of the four Champions League finals that he won during his disastrous Real Madrid career where he scored crucial goals? We have? Excellent) have gone completely all to shit, but Bale himself is by no means the only guilty party there.

Manchester would surely rank at least one place higher on Bale’s infamous personal priority list and at a bargain Every-Bale-Must-Go £18m pricepoint (plus some admittedly hefty albeit potentially subsidised wages) that should be enough to ensure a decent return on the investment.

There are clear and obvious risks involved in a move for Bale, of course. His age now makes him a short-term prospect, and his injury record is far from unblemished.

But he remains a phenomenally good footballer. And his big problems at Madrid just don’t apply in Manchester. The language is an obvious one, but perhaps more so the Ronaldo Situation. Arguably Bale’s biggest problem at Real was coming in for more money than Ronaldo did and then not being as good as him. But you can count on the fingers of one hand the number of players in the history of the game who have been as good for anyone as Ronaldo was for Madrid. The Ronaldo that Bale would have to match up against at United was astonishingly good, but still at least a mortal human man.

Bale will have some wary fans to win over, but performance levels like those shown in his earlier years at Madrid would do it at United in a way they didn’t in Madrid. Even one crucial Champions League-winning goal would be enough; two would just be a lovely bonus.

The key question, then, is can/will Bale regain the form of his final years at Tottenham and first ones at Madrid?

There are no guarantees, but he absolutely can. Bale’s lack of football over the last couple of years is a double-edged sword in this regard. On the one hand, it’s a worry because it’s a long time away from the game, on the other he has avoided the wear and tear that comes with playing regularly at a time in your career when it starts to make its presence felt. Despite starting out at a prodigiously young age, he might now actually be quite a young 31-year-old in footballing terms.

And while the wages are obviously high, it’s not really that great a gamble in modern football terms for a club of United’s stature. On a two-year deal – however that may be structured as an outright purchase or initial loan – the total outlay in wages and fee isn’t that mental for a player whose ceiling is still so very high.

We have concrete proof that he can absolutely light up this division; we don’t have that for, say, Jadon Sancho. With Dortmund still unwilling and, crucially, unrequired to part with Sancho on anything other than their own terms, Bale represents an elite stopgap or safety net. He might only give United a couple of years, but that should be all they need from him.

This time next year, Sancho will still only be 21 and with only two years left on his contract will have reached a point where Dortmund will have to start twitching. Besides, after everything we’ve seen of 2020 and the prospect of what’s to come, there’s a cogent argument to make that planning for anything more than 12 months away is a fool’s errand anyway.

United have been burned with enormously expensive luxury superstars before, of course, but for every Alexis Sanchez there’s a Zlatan Ibrahimovic.

Bale offers a high-level option right across a front three and the motivation of returning to the Premier League and playing for Manchester United – which has to be better than playing more golf, a shit sport specifically designed to frustrate and annoy all who attempt it – could well be enough to coax a resurgence from a player who was still doing bits at a world-class level just a couple of years ago.