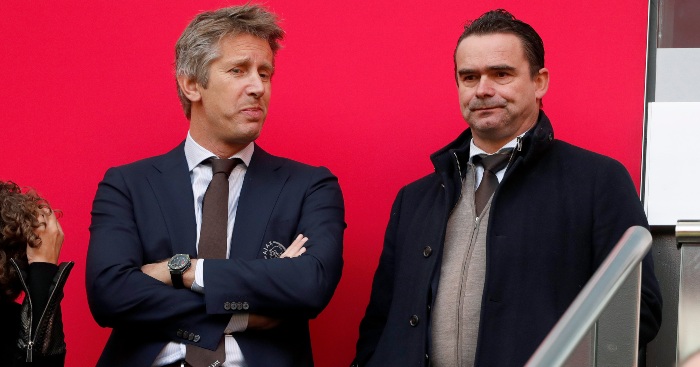 Ajax director of football Marc Overmars has suggested that he and Edwin van der Sar are ready to take on a new challenge.

Former Arsenal winger Overmars and chief executive Van der Sar have restored Ajax’s reputation as one of Europe’s leading clubs while developing a youth system and scouting network that continues to reap rewards for the Eredivisie giants.

Former Manchester United goalkeeper Van der Sar has been linked with a return to Old Trafford since Ed Woodward has spent the last couple of years pretending that the Red Devils are looking to hire a director of football.

The Sunday Mirror and Mail on Sunday suggest Woodward will be interested in Overmars’ latest comments which suggest he and Van der Sar are open to a new project.

Overmars said: “When I was appointed in this job at Ajax I knew I only wanted to stay for three or four years ­maximum.

“I have been here eight seasons now! For me – but just as much for Edwin – it is sure that we are not going to carry on here until we are 60.

“This job at Ajax is costing too much energy. The whole of the ­Netherlands is constantly on my back and has an opinion about us.

“The job has brought a lot of great things too. Edwin and I are proud that we have brought Ajax back where it should be in Europe.

“We have a special bond. The best thing is that we ­enjoyed the great 1990s as players together.

“At the time you don’t realise how special that is. Now, 25 years later, we have achieved the same things at management level that we achieved as players.

“We had one shared ambition – we wanted Ajax to reach a European final. Which one did not matter. We managed that in 2017, and now we want more.

“We want to win the Champions League or Europa League.”