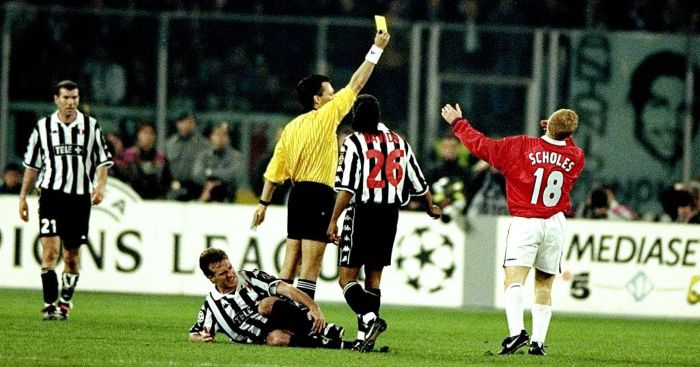 Man Utd legend Paul Scholes has accused Didier Deschamps of screaming “like a big girl” to get him booked in the 1999 Champions League semi-final against Juventus.

That yellow card meant Scholes missed the final which Man Utd – who were also missing Roy Keane – went on to win in dramatic fashion against Bayern Munich, with two goals in injury time securing a famous triumph.

The Red Devils beat Juventus 4-3 on aggregate in a thrilling semi-final clash but Scholes still thinks he was hard done by with the second leg booking.

On how he felt about missing the final, Scholes told a Goal in One podcast: “You just deal with it don’t you.

“I was gutted at the time but nothing you can do about it. I tackled Deschamps and I’ve seen it a few times, I don’t think it was a foul to be honest with you. It was right in front of the ref, he screamed like a big girl, like a big baby which didn’t help me.

“It got me booked and I missed the final but I may not have played in the final, you never know. We had massive games. Big games against Spurs to win the league, the FA cup final the next Saturday and then the Champions League final. I was devastated to miss it, of course I was. Roy was as well.

“But it didn’t matter who was missing, we still had the capability in the squad, someone can fill in and do just as good a job.”