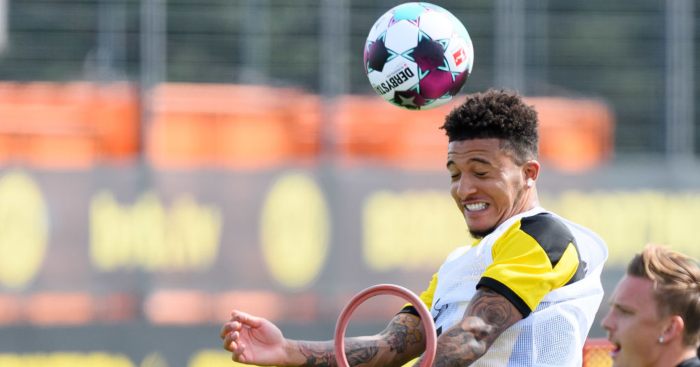 A report in Germany has suggested that Man Utd could now have to pay more than the €120m (£108m) asking price for Jadon Sancho after they missed the deadline to get the deal done.

The Old Trafford giants are looking to make the 20-year-old their marquee signing this summer, but Dortmund were understood to be holding out for a fee in the region of €120m (£108m).

BVB set August 10 – the day they travelled to their pre-season training camp – as the deadline for a deal to be agreed, although Man Utd had long expected talks to go beyond that.

GOSSIP: Sancho to Liverpool in 2021? Thiago to Paris?

Yet with nothing in place and Dortmund ensconced in Bad Regaz, Switzerland, the German club’s sporting director Michael Zorc confidently announced on Monday that Sancho would not be going anywhere.

“We are planning around Jadon,” Zorc said. “He will be a BVB player next season.

“The decision is final. Last year, we adjusted Jadon’s salary to match his performance development. While doing so, we also extended the length of the contract until 2023.”

And Bild (via Sport Witness) has now hinted that Man Utd may have to pay more than the original asking price if they want Sancho now the deadline has passed.

The German newspaper claims that Sancho ‘could be gold-plated’ in ‘post-corona times’ with Dortmund in a position of ‘luxury’.

The extension to his deal until 2023 has given Dortmund time to contemplate a sale and the report says that there is talk of a ‘record’ sale.

Sport Witness add that there is no confirmation from Bild about what record they would be breaking – but their stance is that Dortmund are now in a great place over a potential deal.