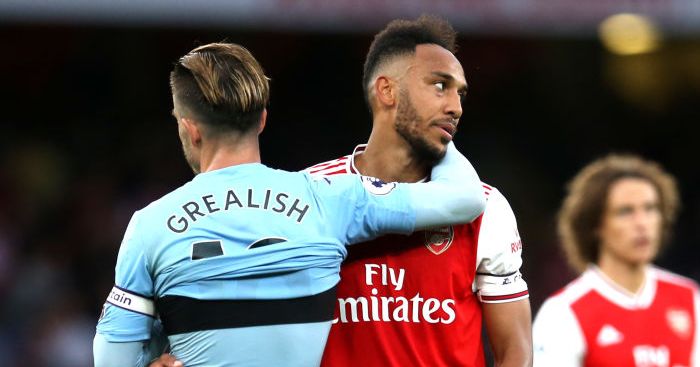 Aubameyang has emerged as a £50m Man Utd target recently, with Ole Gunnar Solskjaer’s side eager to reinforce their attacking options.

Merson feels that the Arsenal striker could be one of the final two pieces of the Man Utd jigsaw, along with reported ‘top target’ Grealish.

“Aubameyang is what Manchester United are missing. He is a goal scorer and goal scorers are priceless,” he told Sky Sports.

“If you look at United and the way they played against Manchester City a couple of weeks ago, I thought they were very, very good. You looked at them and thought they have got a chance, especially if they could also get hold of a couple more players, especially a creative midfielder.

“You couldn’t help but be impressed with their performance and if they were to sign Aubameyang and they also got someone like a Jack Grealish, are they big players? They would be a major force, in my opinion.

“They are crying out for someone who is going to score them 20 to 25 goals, and that’s what Aubameyang can bring. He gets you 25 goals without even breaking sweat. Add a Grealish if they can get him and then you’ve got Bruno Fernandes as well playing in behind a striker, Manchester United will be a major force.

“The Arsenal fans won’t want to see another top striker depart for Old Trafford, that’s for sure, but the Robin van Persie situation was a bit different.

“At that time, it was Arsenal vs Manchester United, they were both the big teams in England and for Arsenal, it was like selling United the trophy.

“This is a bit different because you’ve got to look at where Arsenal are at the moment. They are ninth and if Aubameyang leaves, are they going to finish lower than ninth next season? No way.

“For me, there’s a lot of weighing up that needs to be done. I know the natural reaction is to think Arsenal won’t be able to replace him and his goals and they must do all they can to keep him, even if it is giving him £300,000-a-week, but you can’t just look at next season. You’ve got to look at the all-round picture.

“I’m not saying Aubameyang is not a top-drawer player, he is, but if you are Arsenal and you keep him, are you going to win the Premier League? No.

“The Gunners have a very big decision coming up.”