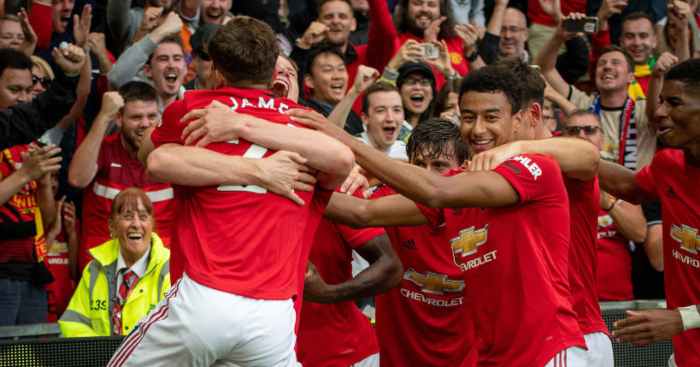 Manchester United players were extremely confident of thrashing Chelsea ahead of their match on Sunday, according to a report.

A cloud of discontent and disillusionment made way for delight at Old Trafford as Ole Gunnar Solskjaer’s side got their Premier League campaign off to a dream start on Sunday.

Chelsea were unfortunate not to cancel out Marcus Rashford’s penalty, but Frank Lampard’s first match at the helm would end in a 4-0 defeat after a second-half collapse.

Anthony Martial and Rashford netted in quick succession, before summer signing Daniel James came off the bench to score in the 81st minute of a dream debut.

And the Manchester Evening News claims that United ‘were convinced they would blow away Chelsea due to their enhanced speed on the counter-attack.’

‘United players were so bullish about steamrollering the Chelsea defence because of their improved fitness levels.

‘United believe teams will underestimate how much quicker they are and the players feel their conditioning is the best in years.’

On the victory, Solskjaer told Sky Sports: “Second half was outstanding. We defended well in our shape and counter-attacked and were more composed on the ball.

“First half we hung in there to be fair. Two off the post, so we can count ourselves a little bit lucky to go in at half-time 1-0 up, but we settled down and played well in the second half.”

Solskjaer also praised his players’ fitness, adding: “The fitter you are the more you can do, it’s as simple as that. The boys have been working hard and this is just the start.”