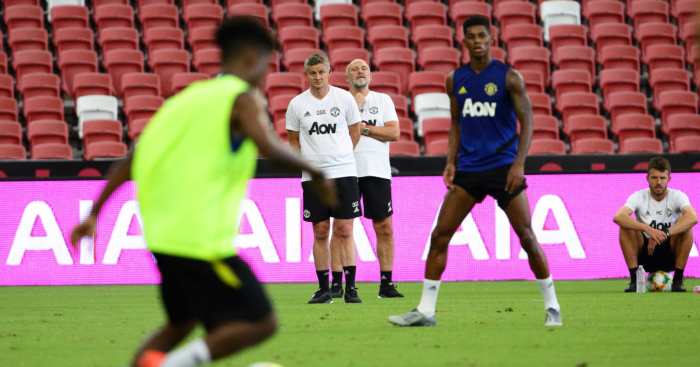 The ‘secrets’ behind Manchester United’s gruelling pre-season regime under Ole Gunnar Solskjaer have been revealed in various reports.

Last summer’s pre-season in America under Jose Mourinho has been described as “toxic” by the Daily Telegraph and the mood this summer is certainly understood to be much improved as Solskjaer lays out the plan to his players.

The Norwegian has laid out a high-energy pressing plan for his side this season and his pre-season schedule has been markedly different to that of his predecessors last summer.

The Telegraph and Daily Mirror report that the high intensity element of training in the two weeks in Perth and Singapore has been up a “staggering 50 per cent on the same two week period under Mourinho a year ago”. Though it is worth noting that this time last year, much of United’s first-team squad were recovering from the World Cup.

United’s players have also covered 10 per cent more ground than at this stage last year with Solskjaer making sure that two thirds of the sessions have been double training blocks.

United’s head of athletic training services, Rich Hawkins has been overseeing and dissecting the data and the club have only been too happy to brief the press with their findings.

“The work ethic has been phenomenal,” said Hawkins. “Day one we had a meeting with the players and presented three key points that we wanted from them – to train with intensity, be committed to the process and when they have a chance to recover, to do it properly.”

It has also been reported that Jesse Lingard, who fell foul of Solskjaer over his Snapchat holiday video, are “among the most impressive” and the manager singled out the effectiveness of his pressing against Inter.

“We’re getting better and better, definitely,” Solskjaer said after the win over Inter Milan. “We’ve had three weeks now in pre-season working on the intensity and pressing in training.

“We’ve got players who like to press on the front foot. I don’t know how many times Jesse won the ball for us but he’s one of the best ones in that pressing football and Marcus is also very good at it. And you saw Anthony working hard to win a few balls for us as well so that’s the way we hope to continue.”

United’s lead sports scientist Ed Leng has also been working in close tandem with Solskjaer and he is focused on improving United’s squad individually.

“We try not to be on top of players, hassling them with data,” said Leng. “We are really streamlined with it but we want to find out what are their strengths, their weaknesses and then build individual programmes off the back of that. Essentially, we are trying to take them to the next level of performance.”