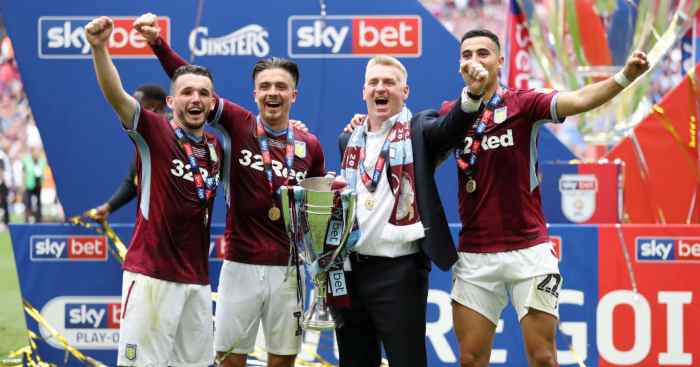 Manchester United’s interest in John McGinn has reportedly forced Aston Villa to slap a £50million price tag on the midfielder.

An Alan Nixon exclusive in The Sun claims that United are preparing to make a bid for McGinn after making background checks on him in the last few days.

United are readying an offer which would be a record transfer fee for a Scottish player, surpassing the £15million that RB Leipzig paid for Oliver Burke.

The 24-year-old Scotland international was Villa’s player of the year, helping Dean Smith’s side to promotion back to the Premier League.

And Smith and Villa hold McGinn, who signed for £2.75m from Hibs just a year ago, in such high regard that they have placed a massive £50million price tag on his head.

United are unlikely to go in with a bid that high, but with Ole Gunnar Solskjaer looking for a replacement for Ander Herrera they are in need of a central kingpin and an offer of around £20million may well be more likely.

The Glasgow-born McGinn is under contract until 2022, but Villa are “already plotting to fend off United’s interest by offering a new long-term contract”.

McGinn hit six goals and 10 assists in 40 Championship games last season and his mobility and competitiveness have apparently attracted Solskjaer, who has already added Dan James and Aaron Wan-Bissaka to his squad.

At 24, McGinn certainly fits the mould of young players that Ed Woodward and Solskjaer are trying to sign this summer.

United have been linked with young Newcastle midfielder Sean Longstaff and it’s not yet known whether McGinn is an alternative to the 21-year-old or a player they are targeting as well as.