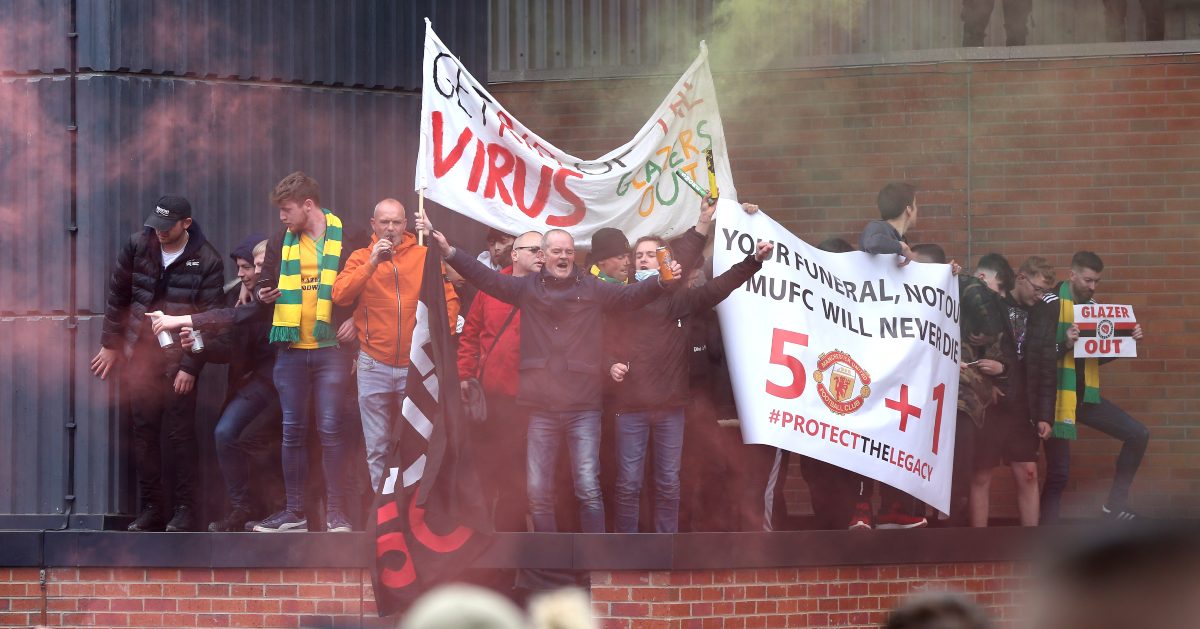 The Glazers trade in a club they can never really own. Now Man Utd fans are ready to stop the men in expensive suits but cheap sporting morals having the whip hand in football ever again…

Call out the instigators
Because there’s something in the air
We’ve got to get together sooner or later
Because the revolution’s here, and you know it’s right…

So sang Thunderclap Newman in 1969, just after the ‘year of the barricades’ that saw Europe and the USA erupt into protest for social change.

Matt Busby’s Man Utd created a revolution in English football in 1968 too – by beating Benfica out of sight to take the European Cup.

“Football is nothing without fans,” said Busby and his words adorned a banner behind the goal as Utd fans took back Old Trafford on Sunday.

This was street justice from fans bereft of help from a game which shrugged its shoulders when a Florida family acquired their club and loaded it with £525 million of debt. A green and gold scarf protest barely registered over the Atlantic, nor did Utd fans breaking away and starting their own community club with FC United Of Manchester.

To those patronising #mufc fans, saying ‘this isn’t the way’, what would you like them to do? Failed by government when Glazers came in. They tried every form of polite protest. They set up a Phoenix club. The owners do not engage. What else is left but non-violent direct action?

The Euro Super League was the straw that broke the camel’s back for a group of fans sucked dry but the storming of Old Trafford had been a long time coming. In the space of 40 years, a creeping commercialisation has kicked in, morphing a relatively unglamorous club with a loyal fanbase into an international corporate machine with Liberian fan clubs and international mattress partners. A 1977 ticket for the same Man Utd v Liverpool fixture abandoned on Saturday cost 80p and, adjusted for inflation, should cost around £6 today.

One reason for the anger against the Euro Super League was that it signalled the completion of a shift of football away from the working class & poor people that built & sustained it.

And while Man Utd striker Marcus Rashford leads the fight against child poverty, the Glazer family were busy in 2020 taking out dividends of £23million in the 2020 financial year according to the Manchester Evening News.

Man Utd stalwart right-back Gary Neville was front and centre with his Sky Sports microphone, perhaps not seeing the irony of his employment in speaking out against a game that has become about profit rather than people.

One Man Utd fan at Old Trafford carefully picked up a TV camera and chucked into the pitch because this was direct action, against not just the Euro Super League but against the wholesale commercialisation of football. Without the Sky Sports Premier League breakaway in 1992, the avaricious elites would have likely never had the balls or the brains to pursue the Super League; the blueprint had been laid out for them.

And while green and gold pyro smoke drifted up to the rafters and fans’ trainers touched the Old Trafford turf, it was fans of United, the most corporate club of them all, saying ‘no more’, their 50+1 banners not just a symbol of fan-ownership but a message that the marketeers and the executives and the hedge funds and the absentee owners in expensive suits but cheap sporting morals can never have the whip hand in football ever again.

And you know that it’s right.