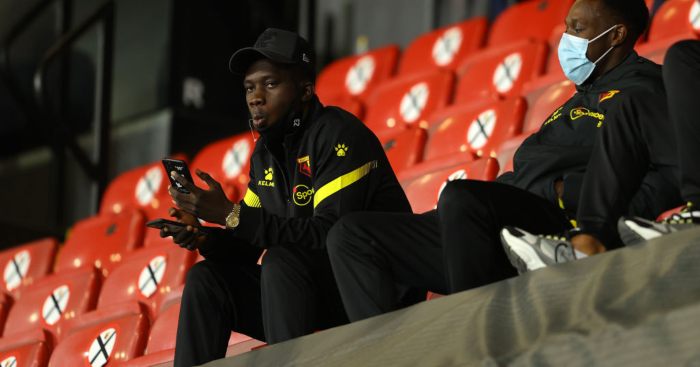 Man Utd will not attempt to sign Watford winger Ismaila Sarr before the domestic transfer window closes on October 16, according to reports.

The Premier League side forked out a sizeable £30m to bring Sarr to England from French club Rennes last summer and his performances last season have only increased his value.

MAILBOX: Should Man United pray for relegation to oust the Glazers?

The Red Devils have been linked with a move for Sarr with reports on deadline day saying that Watford rejected a £45m loan offer, while the Championship club submitting a counter-proposal of their own.

The Hornets apparently proposed that Man Utd would have to pay £25m if they failed to ‘exercise the purchase option’ with ‘negotiations in progress’.

However, Goal claims the Red Devils are ‘not expecting any more changes to their squad before the domestic transfer deadline’.

Premier League clubs can still bring in players from EFL clubs until October 16 but Solskjaer ‘is happy with the forwards at his disposal as he believes he has a variety of options in attack’.

Man Utd failed to bring in a senior right-winger on deadline day with the club refusing to pay Borussia Dortmund the £108m they reportedly wanted for Jadon Sancho.

And Goal admits there were ‘conversations with Watford over Sarr, with the Red Devils keen to take the Senegalese on a loan’ but the Championship club are ‘only interested in a permanent deal’.

The report reiterates that it’s ‘unlikely that any more deals will be negotiated before’ the domestic deadline at Old Trafford.