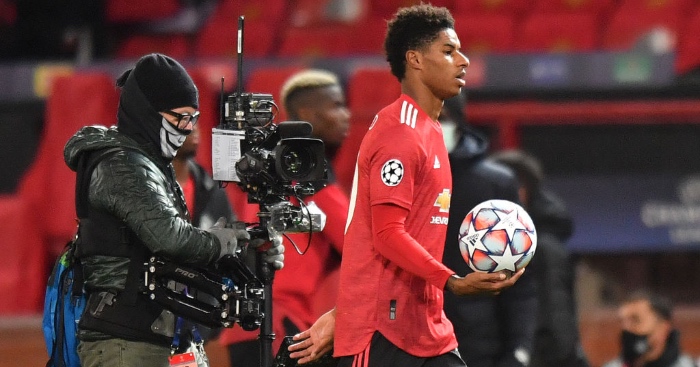 A week on from their deserved triumph at finalists Paris St Germain, United continued their 100 per cent start to Group H by securing a first home win of the season in some style.

READ: Solskjaer produces his greatest game from the embers of his worst

It was a devastating attacking performance that means United look set to reach the knockout phase after just two matches of a tough group.

The hosts went in at the break ahead through a low strike from Greenwood but Julian Nagelsmann’s Leipzig looked threatening, leading Solskjaer to utilise his bench.

What a decision that proved to be. The video assistant referee gave the green light to Rashford’s first goal from fellow sub Bruno Fernandes’ pass, with the forward swiftly following that up with an impressive second.

Martial took the penalty he won as United ran amok, with star man Rashford wrapping things up and completing his hat-trick.

Few could have foreseen the first meeting of these sides being so one-sided given the pattern of a match that Leipzig approached with the kind of confidence Nagelsmann showed when selecting his touchline attire.

But the manager also highlighted the need to balance that self-assuredness with awareness of United’s attacking threats, with Fred’s deflected effort and a threatening Martial cross early warning signs.

United broke the deadlock in the 21st minute. Fred won the ball in midfield and Paul Pogba drove forwards, with his through pass putting Greenwood in to get a smart, left-footed strike low across Peter Gulacsi.

The VAR checked the goal but Dayot Upamecano – a defender with admirers at Old Trafford – was adjudged to have played the 19-year-old onside.

Leipzig responded positively to that setback, with Christopher Nkunku forcing a smart save from David De Gea and Nemanja Matic reacting to stop Marcel Halstenberg getting on the end of the resulting corner.

United withstood Leipzig’s renewed threat for the remainder of the opening period, with Upamecano’s scream for a penalty after being shoved by Pogba ignored just before the half-time whistle.

The home side were themselves calling for a penalty six minutes into the second half, but if Ibrahima Konate handled when on the deck then it was not considered worthy of a penalty.

United were only showing flashes in attack and Leipzig were struggling to create clear-cut chances at the other end, with De Gea alert to tip over a close-range Konate header in the 65th minute.

Solskjaer made three changes around that time in a bid to change the dynamics and one of those introduced almost created a stupendous second, with Fernandes dinking a free-kick over the wall that the outstretching Martial just failed to connect with.

But the Portuguese would soon provide a telling assist, sending a superb first-time ball that put Rashford racing through to coolly slot past Gulacsi.

The linesman had long since raised his flag for offside but the VAR checked his decision, ruling that the forward was in his own half and thus awarding the goal.

Rashford was celebrating again moments later, with the England international impressively chopping away from Upamecano before rifling home as things unravelled for Leipzig.

Martial scored from the spot in the 85th minute after being taken down by Marcel Sabitzer, seemingly denying Rashford the chance at a hat-trick.

But he had other ideas, firing home in stoppage time to secure the match ball.