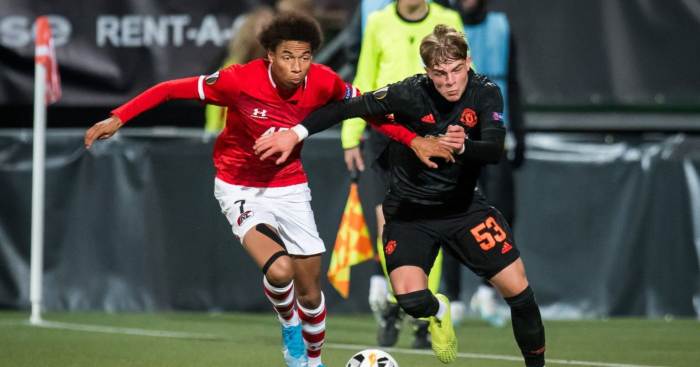 Manchester United are ready to let “four or five” young members of their squad leave on loan in January, according to academy player performance manager Les Parry.

United boss Ole Gunnar Solskjaer has not been afraid to draft in youngsters into his first-team squad this season with Mason Greenwood and Axel Tuanzebe becoming first-team squad regulars, while Angel Gomes, Tahith Chong, Brandon Williams and James Garner have all featured under the Norwegian.

But with United expected to make signings in January their chances may well become limited and Parry says there will likely by loan exits in January.

“We’ll plan it out and we’ve identified four or five who might be going out in January. Obviously, our first-team manager has a say,”Parry told the club’s official website.

“Angel, Tahith, and James could have gone out on loan but he wanted to keep them here and have a look at them on tour. So a decision will be made, no doubt, for January as well. Hopefully, all three will be in the first team and not going anywhere.

“As we know at this club, lads have got into the first team and a lot of it has been through circumstances they’ve got no control over. They’ve been presented with an opportunity and they’ve taken the opportunity so now a couple of them are regulars on the team sheet each week. We’ve had opportunities that have cropped up from nowhere. That’s football.

“Hopefully, some of the lads out on loan now will also catch the eye as some have gone out with a perception of their ability and where they’ll end up but hopefully they’ll come back and people will say maybe we’ve got a little diamond.

When asked about the process that United go through before deciding upon where a player will be loaned to, Parry added: “We draw up a player’s needs before we start the process.

“I’m not kidding that we tick every box, because we can’t, but there have been a few clubs for one or two players, that we didn’t think were suitable.

“On the face of it, it might look a good move, but we didn’t think it was, for one reason or another, so we looked elsewhere.”