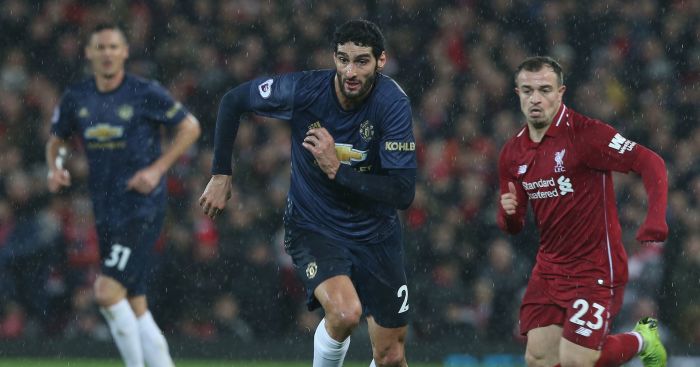 Manchester United are reportedly prepared to sell Marouane Fellaini this month if they can recoup around £15m.

The 31-year-old was a favourite for Jose Mourinho during his time at Old Trafford, but does not fit into Ole Gunnar Solskjaer’s plans.

Fellaini was a regular under the Portuguese, albeit mainly from the bench, but has quickly fallen out of favour since Solskjaer’s arrival as caretaker boss last month – playing just 31 minutes so far under the Norwegian.

And now the Daily Mirror claims that United are ready to listen to offers in the region of £15m for the Belgian.

Fellaini is said to have attracted interest from AC Milan, Porto and Chinese Super League side Guangzhou Evergrande, although the report goes on to add that United will not be held to ransom over a deal.

Any fee received for Fellaini will also be put towards incomings, as the club plan to reinvest funds to strengthen Solskjaer’s squad.