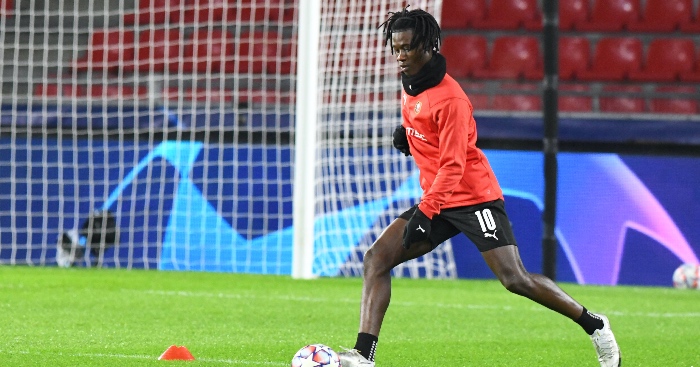 Man Utd and Real Madrid have been handed a blow in their pursuit of Rennes wonderkid Eduardo Camavinga.

The 18-year-old is seen as a future star and could be the long term successor to Paul Pogba in United’s midfield.

He is also wanted by Paris Saint-Germain after bursting onto the scene in France.

FEATURE: Henry, Rooney, Kompany and other Lampards in Waiting

Camavinga has now revealed that he wants to stay with Rennes by signing a new contract.

When asked about his future earlier today, the player said: “Could I sign an extension? Yes. Do I want to? Yes. What is holding it up? I do not know, there are negotiations.”

Camavinga was also quizzed about a change in his representatives. He replied: “My change of agent? These are things that happen, we shouldn’t focus on that. I have faith in my parents quite simply.

“If you want to talk about that, there is my father. It is you, the journalists, who have been talking about me leaving, but I am 100% focused on the club.”

Camavinga has continuously denied claims that he will leave Rennes ever since becoming a star player at the club.

He looks set to become a complete midfielder in the future, which is why he is being chased by so many potential suitors.

AC Milan and Juventus are the final two clubs to be linked with his signature.

The French international has played 23 times in all competitions this season.

That includes four appearances in the Champions League. Rennes ultimately finished fourth in Group E, behind Chelsea and Sevilla. They also finished behind Russian side Krasnodar after failing to win a game, in what was a surprise result.

N’Zonzi is on loan at Rennes from parent club Roma.