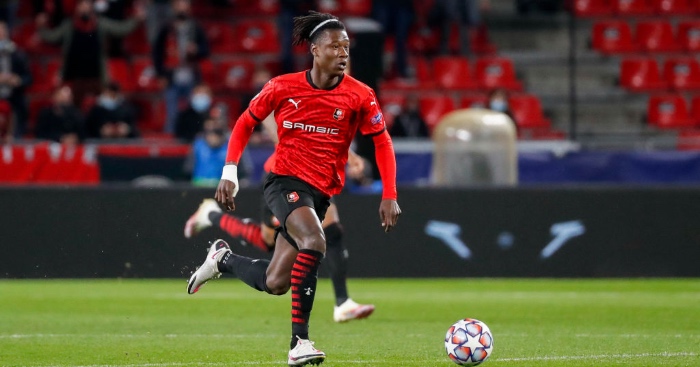 Rennes wonderkid Eduardo Camavinga has provided an update on his future in France after being linked with a host of top clubs.

The likes of Real Madrid, Barcelona and Man Utd are all rumoured to be monitoring his progress.

He has now responded to claims that he might be making a move to one of Europe’s elite clubs in the future.

Speaking at a press conference in his native France, the player said: “I read the news but I am a player of Rennes.

“I have a contract until June 2022, and we’ll see what happens next season.”

When asked about potentially signing a contract extension with Rennes, the player said: “There will be discussions. I have two years left so we will have time to discuss this again.

“This is my club and to stay here would make me happy.”

It sounds like Camavinga is retaining loyalty at Rennes while also not ruling out a big move in the future.

At the moment it seems that move will have to wait until at least 2022, when his contract expires.

The midfielder’s market value could increase rapidly in that time if his development continues.

He has already become an integral part of the Rennes starting 11, making ten appearances so far this campaign.

He’s scored one goal and assisted another during that time.

The 18-year-old is one of the most valuable young players in world football right now. He could be the subject of a huge transfer race when he does eventually decide to move.

They won’t want to lose such a star to one of their rivals for the Champions League.

For now, it looks like Camavinga will continue to play in Ligue 1. But a big transfer is coming, it’s just a case of when.