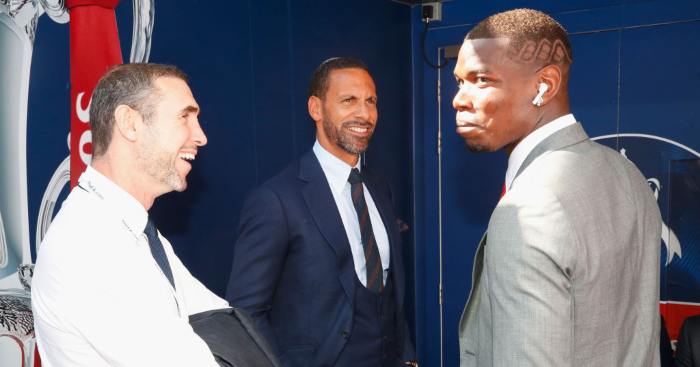 Man Utd legend Rio Ferdinand says that the “only problem” he has with Paul Pogba is that he allows his agent to talk too much.

Pogba admitted earlier this month that he had never heard of former Liverpool midfielder Graeme Souness when asked about the Scot’s long-term criticism of him, which ended up being blown out of proportion.

Meanwhile, the Man Utd midfielder’s agent, Mino Raiola, has also been causing controversy in recent months following a number of comments to the media that the Red Devils are understood to be unhappy with.

And speaking to The Beautiful Game Podcast, Ferdinand addressed both the recent issues: “He hasn’t even played football this year. I don’t understand it. Why are you chatting about Paul Pogba? He didn’t play this season, really. So he shouldn’t be in the conversation, I don’t understand.

“As great a player as Souness was – he was a top player, one of the best. If you were talking about the best British midfielders we’ve produced, he’s in the conversation, 100 per cent, Graeme Souness was a good player.

“But Paul Pogba doesn’t know him. Simple as that, and that’s the difference of generations. I don’t think it’s disrespectful.

“If I was Paul Pogba, I’d say the same thing, but I would have said it from a disrespectful standpoint. Because I’d be saying, ‘you’ve been dissing me all this time and I’ve not kicked a ball, why are you talking about me?’

“And I’m honest about Paul and I love Paul, because he’s a great kid. I’ve known him since he was a young boy and I still chat to him now. But the only problem I have with Paul is he should chat instead of his agent chatting. If he did that there would be more clarity on the whole situation.

“I spoke to him about all that type of stuff but Paul’s his own man and he’s going to deal with it his own way, I respect that, that’s fine. So that’s the only thing I’d say.”