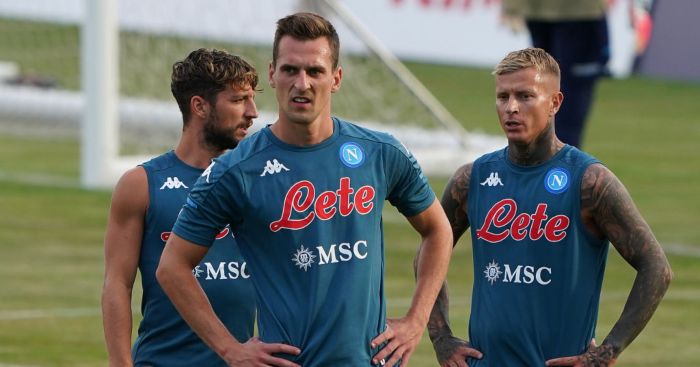 Man Utd are set to compete with Tottenham for striker Arkadiusz Milik after reportedly beginning talks with Napoli.

Milik is the subject of interest from numerous European clubs after impressing during his spell in Italy.

The Poland international has scored 38 goals in 93 appearances for the side and could now be on his way to the Premier League.

According to Italian reporter Ciro Venerato (via Metro), United officials have contacted Napoli about the possibility of signing Milik.

Milik has now emerged as their preferred target up front. The 26-year-old would provide French forward Anthony Martial with competition at the top of the pitch.

The news may force Tottenham into action in their pursuit for a new striker. Manager Jose Mourinho also wants a striker to lessen the burden on his talisman and captain Harry Kane.

Kane has been in great form at the start of this campaign, scoring one and assisting four more in the 5-2 victory over Southampton last weekend.

However, Mourinho knows he can’t play Kane in every game all season and wants a backup player to provide support.

Milik has emerged as the main target and could be subject to a £16.5 million bid from the North London club.

That fee may increase if a bidding far starts for the player. Reporter Venerato believes Man City, RB Leipzig and Fulham are also interested in the player’s signature.

Milik would become United’s second new player of this transfer window if the Red Devils win the race to sign him.

United won their most recent Premier League game thanks to a last-minute penalty from midfielder Bruno Fernandes.