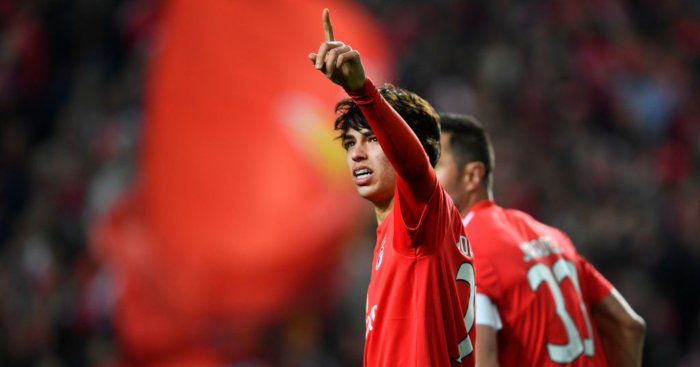 Manchester United reportedly sent scouts to check on the progress of transfer target Joao Felix this week as the Benfica youngster continues to impress them.

Felix has emerged as a transfer target for a number of Europe’s biggest clubs, including Premier League giants United and Liverpool.

The Portuguese, who has been likened to Cristiano Ronaldo, currently has a release clause of €120m (£104m), but Benfica want to increase that to €200m (£173.2m) to fend off any potential suitors.

Among his leading suitors are United and they will again have been impressed by what they saw on Monday night as Felix netted twice during a 6-0 victory over Maritimo.

And according to the Daily Mail, United’s interest in the player has increased after regular Portuguese scout Joao Ferreira was joined by one of United’s lead scouts Simon Wells – a figure highly respected by the club’s hierarchy – in order to get a second opinion on the attacker.

United are looking to bolster their forward line this summer and are expected to spend big in acquiring a young talent capable of adding guile and pace to their attack. The club are also pondering a swoop for Borussia Dortmund’s young star, Jadon Sancho, who would likely cost a similar £100m fee.

Dortmund, however, insist the winger will not be sold for any price this summer and United instead may be forced to look elsewhere if the Bundesliga outfit’s stance does not soften.

Chelsea’s Callum Hudson-Odoi had looked like being another option, but news that he is now facing six months on the sidelines means that interest will likely be shelved for now.

And that could leave United putting all their eggs into the Felix basket, though the Mail claims the club do still hope to drive down the £104m asking price.

The paper does suggest United could look to finance the deal by offering the Portuguese club a lower up front cost, but one which contains a number of performance-related add-ons – as well as a significant sell-on clause.