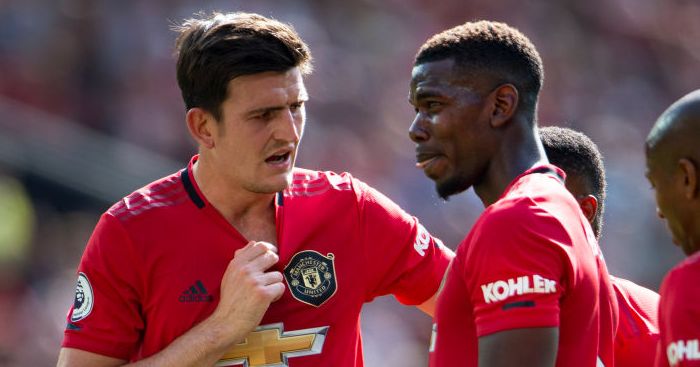 Preaching to the Maguire
The Sun‘s back page is covered with exclusives on Friday. Andrew Dillon has an interview with the impressive Callum Hudson-Odoi on, among other subjects, racism. Paul Jiggins and Duncan Wright team to inform us that Harry Kane ‘faces a battle to be fit for Euro 2020’, with Tottenham intending to sign Krzysztof Piatek to replace him in the interim. And Charlie Wyett claims that ‘Harry Maguire is willing to play through the pain barrier and face Norwich tomorrow’.

It is the third story that has caught the eye. This is the same Maguire whose willingness to play through the pain barrier against Wolves exacerbated his current injury. Even if he wants to feature against Norwich, United surely won’t contemplate it?

Hell, Wyett even says Maguire ‘is ignoring medical advice’ in his attempts to convince Ole Gunnar Solskjaer to play him. Maybe…don’t do that?

Does Wyett question the centre-half for jeopardising his health or, more pragmatically, an asset United invested at least £80m in?

Or does Wyett use this – an exclusive story and not an opinion piece, it is worth reiterating – as an opportunity to criticise Paul Pogba?

That would be option b). This is a man who writes for the nation’s best-selling comic, remember.

‘Boss Solskjaer must now decide whether he gambles on playing his key man despite fears he may even need an operation.’

It’s a home game with Norwich, bottom of a league in which they are the fifth-lowest scorers. This is the most pointless ‘gamble’ ever.

‘Maguire’s attitude is in stark contrast to Paul Pogba’s.’

‘The Frenchman has missed a large chunk of the season with an ankle problem.’

That required surgery. Whereas Maguire’s is a small tear that might not. It turns out that not every injury is actually the same. Who knew?

And bear in mind that Pogba started the first four Premier League games of the season, missed the next two with an ankle injury, started against Arsenal on September 30, missed the next ten matches, returned to make substitute appearances against both Watford and Newcastle, and has been out since.

It does not take a rocket scientist – or Sun journalist – to realise that Pogba picked up an injury and exacerbated it by returning too soon. So how exactly is ‘Maguire’s attitude…in stark contrast’ to his?

Gym fairy
Mediawatch also finds it curious that the Daily Mirror and the Daily Mail have both done stories regarding Pogba’s recent Instagram post of him in the gym during his rehabilitation from surgery.

‘Injured? So what? No excuses,’ reads the caption to his video. The Mail say he is ‘getting straight back to business’. The Mirror add that he ‘wasted little time’ in pursuing his return.

The Sun? Nothing. Charlie Wyett? He’s busy digging him out for an ‘attitude in stark contrast’ to Harry bloody Maguire.

Lone wolf in sheep’s clothing
Andy Dunn does not question Pogba’s ‘attitude’ in the Daily Mirror. Rather, his motives.

‘There is absolutely no harm in Pogba putting out updates on his surgery and treatment, but, across all of his postings in recent times, it is hard to get away from the impression of a lone wolf in an environment that should always be about the team.’

The five most recent posts on Pogba’s Twitter timeline are a retweet of Wendie Renard, a video of him at the gym, a Happy Thanksgiving message, support for Albania during their earthquake and ‘strength and prayers’ to the family of Sahar Khodayari after she died following self-immolation in protest against Iran’s ban on women attending football matches.

There he is, the ‘lone wolf’ using Twitter a couple of times in about six months to send messages of support to others, and Instagram to post pictures of his family. You wouldn’t see Harry Maguire doing that.

Right said Fred
United rushing an under-performing centre-half back to face Norwich at home is a genuine sign of how far they have fallen.

This, from Mark Irwin in The Sun, is not:

‘But they have made little impact on a side now apparently hold below the waterline by the absence of midfielder Scott McTominay.

‘And you really know you have problems when Fred is your leading contender for player of the year.’

That would be a sign of real ‘problems’. If only you hadn’t literally mentioned a better candidate in the previous paragraph. Not to mention poor Marcus Rashford.

I’m sorry, Mr. Borthwick-Jackson
And this, from the Daily Mirror, is just silly:

‘Manchester United’s season sunk to a new low after they were forced to recall a player struggling to get a game at League One Tranmere.’

So they should have left one of their players for another five months at a club they were struggling to get a game? Sounds sensible and businesslike.

Still, it isn’t great that they’re recalling Cameron Borthwick-Jackson, whose last appearance for the club came under Louis van Gaal, to help cover for either injuries or Ashley Young’s impending departure.

Except Jeremy Cross does not even suggest that is a possibility. He says the decision ‘has been met with derision’ and that some Tranmere fans have accused the defender ‘of having a bad attitude’. But at no point does he say United might actually play him.

‘Despite an ongoing injury crisis in the United first-team it is not believed Borthwick-Jackson will have a senior role to play upon his return to the club.’

And considering United recalled Ethan Hamilton from a troubled loan spell at Southend this month before sending him back out for a temporary deal three days later to Bolton, this all seems a bit forced.

So part of the Mirror’s back page is made up of a story about United recalling a player from loan with the probable intention of sending him out again? Talk about ‘a new low’.

I thought I saw a man brought to life
‘Harry Kane is devastated at being ruled out for three months after Tottenham decided the striker will have surgery this weekend to repair his torn hamstring’ – Daily Mail.

And you thought Harry Kane would be delighted. He could learn a thing or two from Harry Maguire.

Stop-start
Thanks to the Daily Mail for allowing us to air a pernickety grievance. This is Mediawatch, after all:

‘Are Liverpool SIMPLY THE BEST? If Jurgen Klopp’s men beat Tottenham it is the best start EVER by any club in Europe… so, are they really better than Arsenal’s Invincibles and Pep Guardiola’s brilliant Barcelona?’

When you are six months and 21 league games into the season, it is no longer a ‘start’. It is literally, mathematically, closer to the ‘end’.