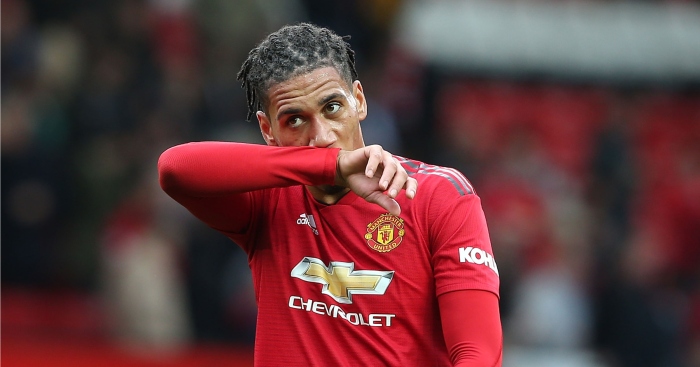 It’s not always easy being Chris Smalling. Louis van Gaal once called him ‘stupid’; Jose Mourinho chuckled at his limitations as a ball-player. And these are managers who selected – and continue to select – him on a regular basis.

The spotlight is harsh when you are at the heart of Manchester United’s defence. Especially right now.

While Gareth Southgate was as cutting as football’s Mr Nice gets about Smalling’s ability to bring the ball out from the back – dropping him from his England squads as a result – Mourinho is likely to turn to him again when United continue their attempts to resemble something like a football team when they visit Chelsea after the international break. He has picked him eight times in a season in which he has even given young midfielder Scott McTominay a crack at playing centre-back ahead of more orthodox options.

The issue of finding a consistent centre-back pairing isn’t peculiar to Mourinho’s reign, even if United’s current troubles have brought it into sharper focus.

Both of his predecessors had a go at cracking the problem of finding long-term successors to the silk-and-steel axis of Rio Ferdinand and Nemanja Vidic, arguably the finest partnership of the Premier League era and the bedrock of five title wins.

Sir Alex Ferguson attempted to start the job before he left the club in 2013, bringing in Smalling and his most frequent sidekick since, Phil Jones.

The reign of Fergie’s replacement David Moyes was short and far from sweet – and his handle on central defensive issues was equally iffy. Though he didn’t buy a centre-back of his own, he did reportedly – and laughably – suggest the veteran pairing of Ferdinand and Vidic could learn a thing or two from watching videos of his former Everton recruit Phil Jagielka. Vidic was unusually diplomatic in his assessment of that idea when he said: “Players don’t always like what managers say to them.”

The duo, their powers fading, were gone by the end of the 2013/14 season. Moyes had exited on less amicable terms before them.

His successor, Louis Van Gaal, managed to stay a touch longer at Old Trafford and padded his centre-back ranks with countryman Daley Blind and Argentine tattoo enthusiast Marcos Rojo.
Blind, since found surplus to requirements and moved on by Mourinho, was, despite his qualities, too small and too slow to handle the Premier League’s best in the centre of defence, featuring more frequently as a left-back. Brief spells of form and some crunching tackles aside, Rojo has spent much of his time at United either causing defensive havoc or injured.

After LVG left, Mourinho shelled out around £30m a piece in successive summers on Eric Bailly and Victor Lindelof. Bailly started with promise and has faded; Lindelof started shakily and has improved. A bit.

Mourinho appears to fully trust neither and, after spending the summer months pining for Tottenham’s Toby Alderweireld or Leicester’s Harry Maguire (depending on who you believe), has spent the time since scowling about Ed Woodward’s failure – or unwillingness – to make either move happen.

Milan Skriniar of Inter Milan and AC Milan’s Alessio Romagnoli have since reportedly been promoted up the Portuguese’s wishlist as he gets desperate. Both would be pricey and neither was a priority a few months ago. Jones, meanwhile, has become a joke figure for opposing fans with his injury record, knack for a gaffe and prodigious gurning skills making him the Premier League’s go-to inspiration for internet memes.

It leaves Smalling – though some United supporters would gladly see the back of him too – if not quite the last man standing, certainly the longest-serving after joining the club way back in 2010 and, at least for now, Mourinho’s main man. He’s not perfect but he can actually defend.

The fact United haven’t found anyone to consistently partner, let alone replace, him in eight years is hardly a resounding endorsement of United’s transfer business in this area.

Vidic saw hope when, a couple of years ago, he said: “I still believe in Chris Smalling. He can improve and do better. He has the mentality to defend, and the physical size to do it. He likes to defend. With a good partner he can be even better.”

The wait goes on.