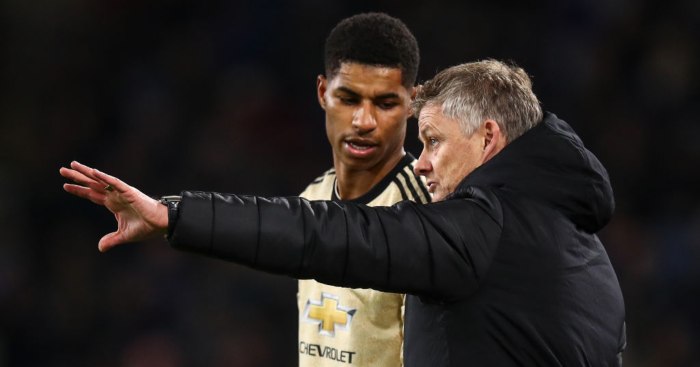 Ole Gunnar Solskjaer has cleared up speculation that Marcus Rashford was already struggling with his back injury before he was selected to play against Wolves in the FA Cup.

The 22-year-old picked up the injury after being introduced as a second-half substitute in the midweek FA Cup third-round replay win over Wolves.

And there have been rumours that Rashford had already been struggling with the injury before Solskjaer picked him against Wolves.

Solskjaer has denied that and says that Man Utd are looking to bring in more players in January.

“He won’t be fit for this game that’s for sure, he will be out for a while, he’ll get the time he needs to recover,” Solskjaer told reporters on Tuesday.

“We’re always looking at improving the squad and seeing if there’s anything out there but nothing I can talk about now.

“He’s not had that injury before. He complained a little bit after Burnley, he felt it the first time, and we managed him as well as we could then, he had some days off for treatment, taken off in games and suddenly this was a new injury. He didn’t have any injuries before then.

“Marcus is good, he’s a positive guy and he knows this is not what he wanted but he’s always positive, he wants to get back as quickly and safely as possible and we’ll give him that time. When he feels ready and medically cleared he’ll be back.

“It might be too early for the academy strikers yet, of course Mason (Greenwood) is going to get more chances now, Juan (Mata) will have to step up again. There’ll be more chances for ones in the squad, we know we’re stretched for numbers but we’ll cope with that.”