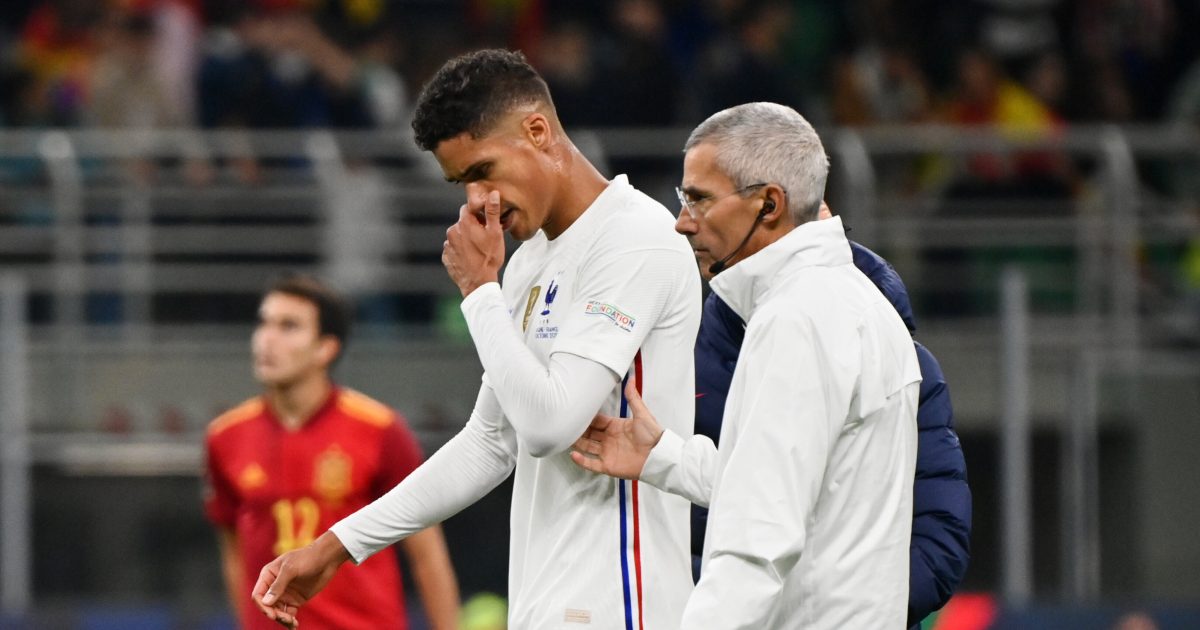 Man Utd summer signing Raphael Varane is a doubt for this weekend’s game against Leicester City after he had to be subbed off by France on Sunday.

During this international break, France have featured in the final four of the UEFA Nations League.

Last Thursday, they came from behind to beat Belgium 3-2 to book their place in the final of the tournament.

Les Bleus faced Spain in the final at the Allianz Stadium on Sunday evening. An action-packed second half resulted in Didier Deschamps’ coming out on top thanks to goals from Karim Benzema and Kylian Mbappe.

Varane started both games but he was taken off in the 43rd-minute against Spain. He immediately waved to the bench when he went down.

The defender attempted to continue but he was unable to do so as he hobbled off before the break. He was later seen on the bench with ice strapped to his right quad.

The seriousness of his injury is unknown at the time of writing, but he is certainly a doubt for this weekend’s game between Man Utd and Leicester City.

Elsewhere, Gareth Southgate has suggested that it will take time for Man Utd to see the best of Jadon Sancho:

“We shouldn’t be surprised that for a young player to have such a big change in his life, new league, new club, different style of play, different training regime, back living in Manchester, moving house and everything that’s involved in that, that’s a lot to take in,” Southgate said.

“So it’s going to need time but he showed a lot of the qualities that he has [against Andorra] and I know that will come with the club as well.

“It was not easy for a winger in the game. Quite often you are receiving the ball with two, sometimes three, defenders really close.

“So you’ve got to pick the right moment to set the ball off. Then the right moments to back yourself to maybe take one or two of those players out. I thought he did that exceptionally well a couple of times.

“It is important that he got the assist because you’ve also got to have that productivity. The right pass or the right cross at the end of those passages of play.”