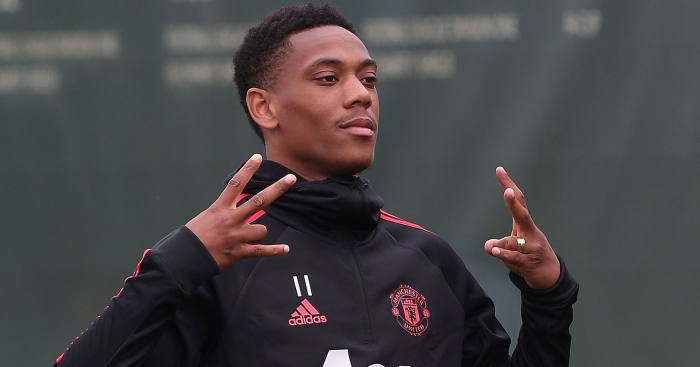 Manchester United winger Anthony Martial is in line for his first France cap in a year after being selected in Didier Deschamps’ squad for the opening Euro 2020 qualifiers.

The 23-year-old missed the cut for last summer’s victorious World Cup campaign and had to fight for his United place under former manager Jose Mourinho, but re-established himself with a run of six goals in five league games in October and November.

He was named in the original squad for November’s internationals against Holland and Uruguay but pulled out due to injury, meaning the qualifiers against Moldova and Iceland this month mark his first opportunity to feature for his country since last March’s win over Russia.

Ousmane Dembele has been ruled out after suffering a hamstring injury in Barcelona’s Champions League win over Lyon.

The 21-year-old winger scored Barca’s final goal in a 5-1 win after coming on as a substitute for the final 20 minutes, but suffered the injury along the way and faces at least three weeks out.

A club statement on Thursday announced: “Ousmane Dembele has undergone tests with the FC Barcelona medical services on Thursday morning and it has been confirmed that he has torn the femoral biceps muscle in his left hamstring. This means he will be out of action for an expected three or four weeks.”

Lyon full-back Ferland Mendy is also absent after being injured in the same game. Mendy had been expected to feature after making his debut in November’s friendly win over Uruguay.

Everton defender Kurt Zouma has been selected after winning his third cap in October’s friendly against Iceland, with Manchester City’s Aymeric Laporte left out.