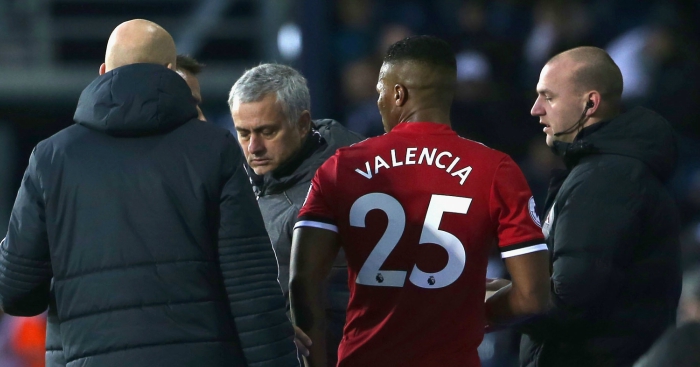 Antonio Valencia has denied Jose Mourinho’s claims that injury is keeping him out of the Manchester United side.

Valencia missed 17 games in all competitions last season, but has already been absent for 12 in 2018/19 as his grip on a first-team place has loosened.

The Ecuadorean has been battling reported injury problems, yet Mourinho made light of a recent Instagram post which showed Valencia aiming to prove his fitness in the gym.

“I watched something funny in Antonio’s Instagram where he says “work, work, work” in the gym,” the manager said earlier this month.

“He should say alone because he is injured and can’t train with the team. It looked like he was working really hard – but without the ball and without the team. He’s not ready.”

Despite this, Valencia insists he is out of the side due to a “tactical decision” made by the Portuguese, who he apparently hardly talks to.

“The relationship with Mourinho has always been a good one,” Valencia told Area Deportivo.

“Right now I haven’t been playing, but it’s more of a tactical decision. The player who has been in my place has been playing well. You have to respect the decision.

“The only thing I can do is prepare and be ready for when he needs me and be in the right condition to compete.

“I’m calm right now and I know I’ll get an opportunity to play again.”

The confusion comes after Valencia was forced to apologise for liking a social media post calling for Mourinho’s sacking. Drama.