Home All The News Man Utd target Mina: ‘I was paying for Messi’s shopping!’ 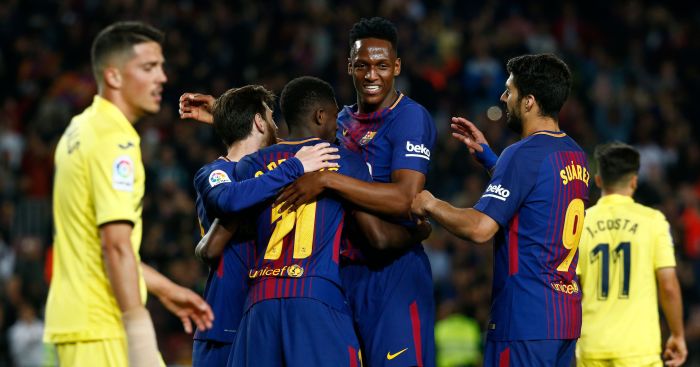 The centre-back has been linked to a number of clubs, including Manchester United, after scoring for Colombia against England at the World Cup in Russia this summer.

Mina has had a tough start to life at the Camp Nou as he struggled for playing time last season but he has still enjoyed his time at the club to date.

“When I arrived, to create a good atmosphere I started to bet with Messi and Suarez to see who took the best free-kicks in training,” Mina told Bocas magazine. “I did it just to watch them.

“Before I knew it they were taking 50 euros a day off me. And I was like, ‘What, I’m paying for these guys to go shopping!’ But the truth is those monsters put the ball wherever they want it.

“They are fantastic people and they are wizards.”

However, Mina has described going through a few dark moments since his arrival in Spain.

“I thought a lot of things, a lot of bad things,” Mina added. “I thought I was finished.

“I felt so bad and [Philippe] Coutinho and Paulinho tried to encourage me all the time and told me that everything would be fine.

“For me, I understand that there are spectacular players [at centre-back] but I just wanted to have a minute to impress and it didn’t happen.

“The few minutes I did get, they were bad … it felt at times like everything was going wrong and coming down.

“I felt like I couldn’t do anything right, such as even giving a pass in training.”