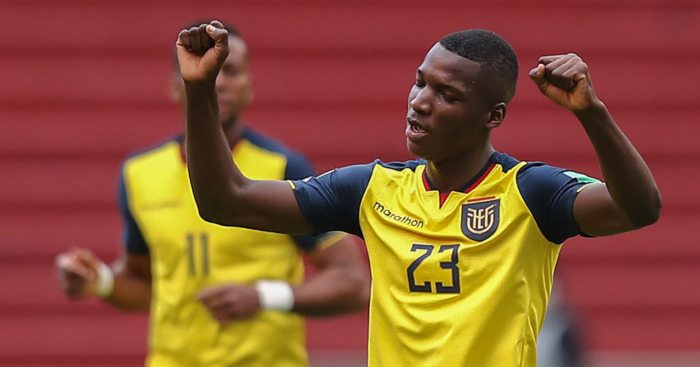 Man Utd target Moises Caicedo has formally agreed to join a Premier League club, according to his manager.

The 19-year-old has been heavily linked with a move to Old Trafford in recent months.

Everton and Chelsea are the other Prem sides thought to be chasing his signature during the January transfer window.

Independiente del Valle manager Santiago Morales has now confirmed that one of those clubs might have been successful in their pursuit.

Speaking to Chilean outlet La Red (via Manchester Evening News), Morales said: “Everything is closed with a Premier League club for Moises Caicedo. Today he’s getting his work visa and between Wednesday to Thursday we announce it.”

The news means we will know later this week which team Caicedo has decided to join.

The Ecuadorian international mainly operates as a central midfielder. He has been likened to Chelsea’s N’Golo Kante in the past, such is his potential.

It was thought that United were the frontrunners for his signature, until they seemed to cool their interest.

He burst onto the scene last season after emerging through the club’s academy.

South American expert Tim Vickery has previously said this about the player: “A year ago, he was talking about Kante of Chelsea being his role model and he is already more than that.

“In say, a 4-2-3-1, he is like that second man in that line of two so he can defend, but he can also bomb forward. He’s timing his runs very well, he’s cool in possession and he seems to have the whole lot.

“I think he is a wonderful, wonderful signing. That kind of box-to-box midfielder that’s very much in the tradition of the English game. Strong, quick, intelligent and cool. He really does look like the genuine article.”