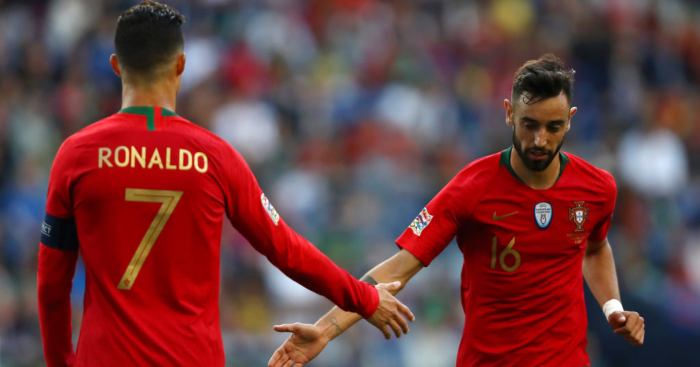 Bruno Fernandes’ situation at Sporting Lisbon has confused Cristiano Ronaldo amid speculation that Real Madrid could make a move for him.

Fernandes was heavily linked with Manchester United over the summer, before they abandoned their pursuit of him due to concerns that he wouldn’t fit into Ole Gunnar Solskjaer’s style of play.

Now, AS claim that the Portuguese star has been offered to another of Ronaldo’s former sides, Real Madrid, with the Spanish outlet suggesting agent Jorge Mendes has told them they can sign him for €70m (£64m).

Meanwhile, Ronaldo has revealed he is baffled by the 24-year-old’s failure to secure a move away from Sporting.

Ronaldo told TVI: “In the national team you have Cancelo, Bruno Fernandes, who nobody knows why he doesn’t leave.

“In the national team, you have a lot of talent, so I see the light at the end of the tunnel. Possibly this new generation will be the best at the talent level, but that’s not enough.

“They have to want to. I have spoken to him. Positive, I’m a captain who wants to help and be helped.

“The atmosphere in the national team is spectacular. The last few years have been the most enjoyable, both because they want to learn and because there is this.

“The most responsible for this is Fernando Santos and the president of the FPF.”